Niby the Almighty is a warlock located in Icecrown Citadel, who is unbelievably vain. Niby refers to people as insects and expects them to bow down to him. He was also notably incompetent. He keeps an imp as his minion, named Impsy, who holds him in an extremely low opinion.

Niby the Almighty originally found in Felwood holds a vendetta against the people of Stormwind City, for exiling him. As such, he seeks to summon an especially almighty demon to wreak his revenge. Occasionally, Niby will attempt to summon this demon unaided, resulting in nothing but a mild explosion. Consequently, Impsy criticizes Niby's inexperience, resulting in an short chase between the two. Despite his incompetence, aspiring warlocks are sent to him to learn how to summon an infernal. Upon turning in the quest

[55] Kroshius' Infernal Core, Niby used a demonic core to attempt another summoning. This time, he succeeded to some extent, producing an over-sized demonic chicken named El Pollo Grande. While Impsy found the summoning most amusing, Niby was at first surprised, but then regained his composure and assured himself that Stormwind City will see its death from the summoned chicken. Unsurprisingly, this did not come to pass, though apparently the chicken did go on a rampage large enough for it to be heard of down in Gadgetzan.

Niby the Almighty has relocated to Light's Hammer within Icecrown Citadel, where he sells the Tier 10 armor for warlocks. Unlike in Felwood, he doesn't insult those who speak to him.

He is nowhere to be seen in Felwood, having left at some point. Strangely enough, however, Impsy remained behind, and now apparently works for or with the satyrs.

Though he doesn't appear, Impsy does, apparently still his minion, despite Impsy appearing to work for the satyrs in Felwood at the time of the Cataclysm. Impsy still holds him in extremely low regard, still seeing him as incompetent. 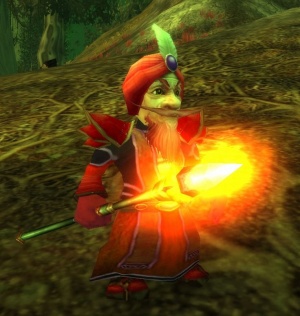 Niby the Almighty in Felwood

Niby is part of the quest chain where warlocks gain their infernal, wherein he does nothing but talk down to the player for their inferior abilities in fel arts while his imp mocks him openly.