For tactics for Nielas Aran's fight in Karazhan, see Shade of Aran.

Nielas Aran was the court conjurer of Stormwind, advisor to the throne and father and teacher of the sorcerer Medivh. Of all the mages, wizards, conjurers, and sorcerers, he had the most potential to protect and strengthen Medivh.[3] 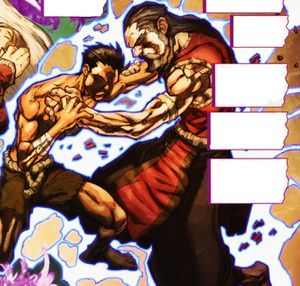 Nielas Aran killed from the backlash of both Sargeras's and the Guardian's power awakening within Medivh in World of Warcraft comic.

Nielas was a member of the Tirisgarde, a branch of the Order of Tirisfal, and was tasked with finding and capturing the wayward guardian, Aegwynn. Upon finally locating Aegwynn, Nielas hounded her for months; until they came to realize they both harbored similar opinions of the Council and its misdoings. Over time they fell in love and decided they must not allow the Council to name another Guardian. The two bore a child together, and named him Medivh. Nielas's natural affinity for magic would run deep within the child and define the tragic steps the child would later take. The power of Tirisfal was also implanted in the child, yet it wasn't to awaken until he reached physical maturity.[4]

Aegwynn left the baby Medivh in the care of his father and his people at Stormwind Keep.[5] On the eve of Medivh's Age of Ascension, Medivh awoke to fevered dreams, and sought his father. Upon merely touching the boy, a backlash of energies poured from the child, and only the combined powers of a hundred clerics and the Conjurer himself were able to properly contain him.[6] Medivh and Nielas were locked in a magical trance for hours or possibly days, before, finally, they both collapsed. Nielas was dead, drained of all life, and Medivh was in a deep sleep. Medivh was taken to Northshire to be tended by the Clerics.[7]

Nielas Aran is dead, but he does not slumber peacefully in death; a boss called the Shade of Aran — a white-haired human mage - appears in the Guardian's Library in Medivh's tower of Karazhan. It has been confirmed that this ghost is in fact that of Nielas Aran, though how he became trapped in his son's tower is unknown. After arriving in Karazhan, he took Medivh's journal from Kamsis and now carries it with him.

At some point, his ghosts was approached by Loania and Lieren looking for their father Dougan. Furious, he attacked them and try to manipulate only to be saved by the ghost of Dougan. Aran commented that he is forever trapped in the tower, always shifting.[8]

A vision of Medivh accidentally killing Nielas is seen in the dining hall of Karazhan.

Nielas Aran is described as an Archmage of Kirin Tor.[9]

Enough of this weakness, boy! Contain your magic!

Judging from his surname, Fordred Aran might be related to Nielas Aran.

It is possible, considering that it was well known that mysterious visions lurked the halls of Karazhan, that Nielas' spirit was drawn to the tower because of a vision experienced by Khadgar decades before - showing Nielas and Aegwynn shortly after Medivh was conceived.