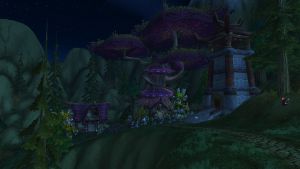 The Night Elf Village seen from its entrance. 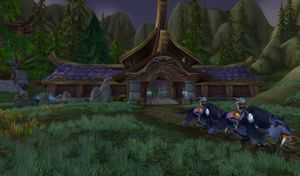 The Night Elf Village is located in the Hyjal Summit area during the Battle for Mount Hyjal. It is traveled to after the Horde Encampment falls. Here, Tyrande Whisperwind gives the

[Tears of the Goddess] for use against Archimonde.

The village is the one military base of the battle that doesn't look much like it was in Warcraft III. It is protected by several ancient protectors, an ancient of war, and an ancient of lore. There also several moonwells, a Hunter's Hall, and a few kaldorei towers.

The base is populated with archers, huntresses, druids of the claw, druids of the talon and dryads. Several glaive throwers can also be seen even though they were not used by the Sentinels during Warcraft III. As more nods to the RTS, Tyrande is mounted on Ash'alah, her saber cat, and some of the troops are colored in blue.