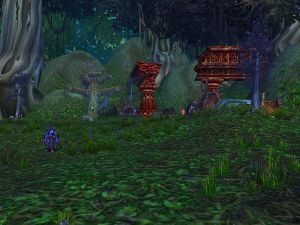 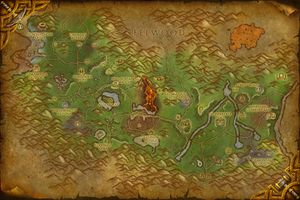 is located in east-central Ashenvale, east of Raynewood Retreat and northwest of Splintertree Post. It's inhabited by the Felmusk satyr.

Shortly after the Sundering, Arvell and Ralaar in Pack Form attacked the Sentinels battling the satyrs, killing Aldorei, Elanu, Morina, Tyrnas and wounding Shandris.[1] The attack marked the beginning of the War of the Satyr.[2]

It is one of the three Ashenvale satyr settlements, the other two being Satyrnaar and Xavian. Of the three, Night Run is by far the smallest, boasting only a few broken pillars and pieces of ruined architecture as shelter for the satyr who live there. Here is one of the soulgems belonging to the Cult of the Dark Strand, which the Satyr are allied with.

It is also the hardest of the satyr settlements to get to, as it is located on a naze that juts out into the land with unclimbable cliffs on the side. To get to Night Run, one has to run along the Falfarren River almost to the waters of Xavian before turning west[72.5, 50.0]

, or approach it from a narrow ledge north of Raynewood.