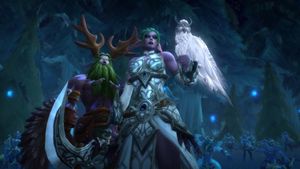 Tyrande as the Night Warrior.

The first known Night Warrior was Thiernax, who lived on the planet Fyzandi. Long ago, their planet was attacked by an Old God. The Old God and its minions waged war on the people of Fyzandi for generations, starting in the era of Thiernax and his husband Qadarin's great-grandparents: this conflict became known as the Endless War. Qadarin's mother attempted to become the Night Warrior to stop it, but the power killed her. Thiernax underwent the ritual and obtained the power to defeat the Old God, fighting with Qadarin at his side, but the cost of using the Night Warrior's power was Thiernax's own life. After the two successfully slew the Old God, they died having saved their world.[3][4]

Legend says that long ago, the Night Warrior was used by the night elves to carve out their empire. None who have attempted the ritual since then have survived, for Elune's raw power tears them apart.[2]

During the Fourth War, Tyrande Whisperwind survived the ascension to become one. Not only was she empowered, but many other night elves were as well, forming the Army of the Black Moon.[2] Elune's power also shrouded Darkshore in an unnatural, seemingly eternal, night.

As the worship of Elune is not limited to Azeroth, people from other worlds also became Night Warriors.[6]