Nightbane is a summonable raid boss in Karazhan. He is a fiery skeletal dragon, transformed by Medivh from Arcanagos and formerly of the blue dragonflight. While not the ruler of Karazhan, a position apparently held by Prince Malchezaar, many consider Nightbane to be the true final boss of the tower, due to his superior difficulty in the early days of the raid's release.

[Blackened Urn] is no longer required to summon Nightbane, a raid member must have completed the

[70R] Medivh's Journal in order to click the urn on the ground. This means Heroic Shattered Halls and Sethekk Halls must be partially completed.

It seems likely that he became a fel dragon.[1]

When the Dark Portal was opened by Medivh, almost every creature on attuned to magic on Azeroth felt ripples as the gateway flared to life. Arcanagos traveled to Karazhan with Medivh's mother, Aegwynn, to confront him about it. The tower was crowded with nobles who were expecting a gala, and so Aegwynn entered alone at first, hoping to convince Medivh to give up his power peacefully. After Medivh revealed that said power was that of Sargeras, he and Aegwynn began to fight, shaking the tower to its foundations and causing the would-be revelers to flee. When Aegwynn was temporarily incapacitated, Arcanagos joined in.

However, despite being a blue dragon, Arcanagos was severely outmatched. Sargeras struck him down, burning him from the inside out until all that was left was bone. Her friend's death sent Aegwynn further into a rage, and as their duel continued, Aegwynn slowly gained the upper hand.[2] 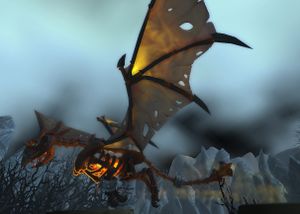 Nightbane in World of Warcraft.

Nightbane has two phases that he transitions between several times during the course of the fight. During the Ground Phase, tank the boss on the ground in a style reminiscent of Onyxia. At 75%, 50%, and 25% health, he enters the Flight Phase and takes to the sky, during which time the raid's attention is focused elsewhere. After Nightbane finishes casting Rain of Bones and then Smoking Blast he begins a slow descent back down to the platform (to roughly the same location as the original landing) and Phase One begins anew. He is NOT tauntable.

Abilities on the ground

Abilities in the air 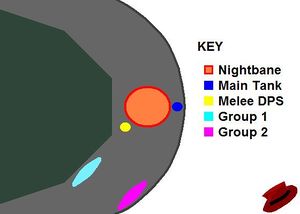 The Ground Phase lasts from when Nightbane lands until his health hits 75%, 50%, or 25%, at which point he then takes to the air for the Flight Phase. All during the Ground Phase Nightbane casts Charred Earth, Fears, and Cleaves.

Tanking Nightbane is a fairly straightforward affair, with the exception of fear. Handling fear is paramount to success, as one or two uncontrolled fears will guarantee a wipe. Warrior tanks can minimize the effect of fear by stance dancing. Having a macro to avoid fear really helps. For the Druid or the Paladin tank, however, things are not so easy unless Fear Ward is present. Patch 2.3 changed the cooldown of Fear Ward to 3 minutes, making it difficult to rely on by itself for the encounter. But since Nightbane will chase the tank even if the tank is feared, raid members can run out of range of the fear to avoid getting caught by a cleave or tail sweep. A tremor totem in the tank's group is a huge help for this strategy by reducing the amount of time the tank gets feared.

Healing in this phase is not particularly difficult, with the fight resembling a simple Tank and Spank, but be careful not to rip aggro with an early heal on the tank. Nightbane has a lot of burst potential when his melee is combined with his cleave and smoldering breath, so healers need to be somewhat awake, even though they can get outside the 5 second rule quite often.

Another ability that might be problematic during the Ground Phase is the Charred Earth. Assuming it appears beneath Group 1, Group 1 should briefly shift over to Group 2's position until the area is safe again, and vice-versa. Occasionally, both groups may fall victim to Charred Earth at the same time—if this happens, all healers and ranged must temporarily shift forward to remain in range of the tank and the boss. Consequently, both groups will be closer to the boss and vulnerable to the fear. The tank must be ready to take preventative measures as required should the raid's healers suddenly find themselves incapacitated. When melee DPS are avoiding Charred Earth, they must be careful not to move into the area vulnerable to Cleave (ahead of his front legs) or Tail Swipe (behind his back legs). Any melee-type wandering into his head area are prone to being one-shot.

This is a long, healing-intensive fight that can last upwards of 10 minutes. Timed correctly, many mana-regenerative cooldowns such as

[Shadowfiend] may be used twice during this encounter.

Nightbane flies into the air, signaling the start of the Flight Phase. Flight Phase lasts until Nightbane has finished using his two abilities of Rain of Bones and Smoking Blast.

Immediately after Nightbane summons skeletons while in his Flight Phase, it targets the raid member with the highest threat and repeatedly casts Smoking Blast on this target. This is typically a healer.

Smoking blast deals physical damage, so the more armor the target has, the better. Paladins would be ideal; however, due to their mechanics, it is very difficult for them to have the highest threat. Even if paladins have improved righteous fury, their healing threat generation is only 0.5*1.9=0.95 compared to the 0.7*0.8=0.56 threat (Priest or Druid with blessing of salvation, 0.595 for a Shaman) that the other healers will have. In general, it is fairly difficult for the paladin to compete with healing aggro for Smoking Blast against priests and shaman who have AoE heals.

Healers must be prepared to spam heals on whomever the affected primary healer is. This will likely occupy a majority of your healers' time, which complicates dealing with the skeletons. When formulating a strategy for killing the skeletons, remember that your healers are otherwise occupied.

Alternate Method #1 This method requires a Resto Shaman with

[Earth Shield]. When Nightbane takes off, have the Shaman place an Earth Shield on the tank. Once the Rain of Bones begins and the skeletons start to spawn, have the tank grab aggro on as many of them as possible (Thunderclap [improved talent works wonders here] for Warrior tanks, or Swipe for Feral Druids). The skeletons will proc the Earth Shield on the tank, thus generating the healing aggro on the tank. This will limit healing in multiple ways, 1) only one to three people actually taking damage from Rain of bones, 2) Earth Shield will keep the tank up easily provided the resto shaman's gear is decent, 3) the Smoking Blast will only be hitting the tank with the Earth Shield (which will in turn proc it more). You can drop a Tranquil Air Totem if the tank is not in the healers' group to ensure that healing can still go out, but Smoking Blast will hit the tank.

All healers and ranged collapse to where the main tank is standing in order to avoid the Fireball Barrage. Once Rain of Bones starts, all players must immediately move away to avoid taking too much AoE damage. Five skeletons will spawn during the Rain of Bones. These hit fairly hard. To mitigate this damage:

Lacking a good Paladin tank, it may be more effective to kill the spawns one at a time rather than AoEing them. Be warned: Due to the Smoking Blast occupying the healers, there isn't much chance for survival if a mage or warlock draws aggro from AoE.

Also, If you are still having trouble with this fight being the Skeletons still are not going down fast, people are dying or its killing the healers mana, It might be an idea to have your raid prepared with

[Stratholme Holy Water] from the Undead side of Stratholme. Using this when all 5 are up will deal decent damage, and if everyone that can't AoE uses this they should go down much quicker.

Transition to the Ground Phase

Ten seconds before Nightbane lands, all members of the raid should fall back to the previous positions, dragging whatever skeletons are still alive with them. Ideally, all adds will be dead at this point, but having one or two still up before Nightbane descends is fine. The tank must remember to keep an eye on the casting bar, and stance dance to avoid an early fear. A recent change has made this fight a bit easier for raids that do not have fear wards/tremor totems/warrior tanks. Nightbane will keep aggro on the tank, regardless of whether the tank is feared or not. This introduces the challenge of the tank being feared into the ranged group, but it does make paladin and druids tanks more of an option.

The most dangerous parts of this fight are the transitions between the Flight and Ground Phases, when the main tank must reestablish aggro. Hunters'

[Misdirection] is especially useful here, to make sure the boss goes directly for the tank.

Ground Phase begins again when Nightbane lands, rinse and repeat at 50% and 25% until victory.

All Gear No Skill (Azshara US) Rogue PoV