This article is about the rebel faction itself. For the faction's emissary quest, see

“We are only as strong as our will.”

The Nightfallen, also called Dusk Lily rebels,[1] or simply the Dusk Lily,[2][3] are a dissident nightfallen and nightborne faction that splintered from the rest of nightborne society in Suramar City and led a rebellion to overthrow Grand Magistrix Elisande and her demonic allies. Led by First Arcanist Thalyssra, the Nightfallen waged a successful war of resistance against Elisande's loyalist forces, eventually taking control of Suramar.

With their success, they liberated Suramar and its people from the Burning Legion and expelled the demons from the city. They would also continue to aid the defenders of Azeroth in their wider fight against the Legion. Now sole rulers of their people, Thalyssra and the Nightfallen began to forge a new future for the nightborne race. In this new role, they would be responsible for the subsequent nightborne entry into the Horde.

For most of the rebellion, the main headquarters of the Nightfallen remained the underground complex of Shal'Aran, though they maintained bases and safehouses throughout Suramar. Having come to power in the city, they are now based in the Nighthold itself, the traditional seat of power for Suramar's rulers.

The Nightfallen were founded as a direct result of the Burning Legion's third invasion of Azeroth. When the demons first arrived on the world in the Broken Isles, they made contact with the nightborne in Suramar. Threatened with annihilation, Grand Magistrix Elisande reached an accord with the Legion, though many citizens opposed this decision. One of these dissidents, First Arcanist Thalyssra personally led a failed coup to prevent Elisande lowering Suramar's defenses to the Legion. Despite her efforts, the attempt was betrayed and crushed, with Thalyssra herself escaping on the brink of death.[4] 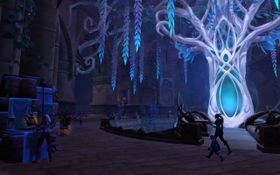 The Nightfallen base at Shal'Aran

Though her city was now occupied by demonic forces, the First Arcanist refused to give up the struggle. She made her way to the subterranean ruins of Shal'Aran in central Suramar and made contact with outsiders also resisting the Burning Legion based from Dalaran. Order Hall champions sent by Archmage Khadgar eventually responded to Thalyssra's plea, saving her life and claiming Shal'Aran.[5] Her position stable, Thalyssra began to take the first steps in forming an effective resistance movement.

Fortunately for the fledgling rebellion, many nightborne were still strongly (albeit secretly) opposed to the Legion's arrival. Before long, many key figures had been recruited, such as Arcanist Valtrois, Chief Telemancer Oculeth, Silgryn, and Lady Ly'leth Lunastre. Refugees and exiled dissidents from across Suramar joined the faction, which had become known as the Nightfallen in reference to the devolved state most of the rebels were in, cut off as they were from the energies of the Nightwell. They also began training withered to help them fight their opponents.

With the help of their foreign allies, the Nightfallen quickly gained ground and support against Elisande and her forces. The war they waged was one of stealth, employing hit-and-run tactics and keeping to disguises and the shadows. The figure of First Arcanist Thalyssra in particular inspired hope and support among the populace,[6][7] while Elisande's worsening cruelty alienated many of her allies.[8][9] The dusk lily, a flower associated personally with Thalyssra, would become the main symbol of both the rebellion and the Nightfallen themselves. 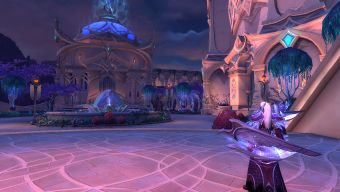 The Nighthold under Nightfallen control

As the conflict reached its climax, the Nightfallen were able to reverse their withering state through the fruit of the powerful Arcan'dor tree, which freed them from their magical addiction. Coupled with the arrival of three other elven armies to support them,[10] the Nightfallen were ready to march on Suramar City and topple the Grand Magistrix's regime. After battling through the city and laying siege to the Nighthold,[11] they and their allies were finally successful; Elisande was slain and the Burning Legion firmly defeated in Suramar.

In a closing act of the civil war, and as part of her new role in leading her people, Thalyssra made the decision to let the waning Nightwell die. She reasoned that its death would mark a new beginning awaited the nightborne, with the Nightfallen guiding them in rejoining the world.[12]

The Nightfallen would continue to support their allies in the ongoing war in the Broken Isles against the Legion, which eventually proved successful. Suramar itself has suffered terribly in the civil war, and work was done to rebuild their society and their city. First Arcanist Thalyssra assumed the role of leader, while other prominent Nightfallen also took up positions of power from the Nighthold. The Duskwatch, once the rebellion's sworn enemy, was assimilated into the new regime. The deserter-turned-rebel Victoire was placed in charge of the security force and made First Blade under Thalyssra.

Despite the successes they had achieved, Thalyssra was convinced that the nightborne should seek out allies as they took their new place in the world. Though she considered joining the Alliance, in the end she and the other Nightfallen would ally with the Horde.[13] In the lead-up to the Fourth War, the Nightfallen would join the Horde in their preparations for war, while many new nightborne adventurers ventured out into the world for the first time.

Many quests in Suramar award reputation, and completing

[Nightfallen But Not Forgotten] opens up their world quests. Progressing further into the faction's storyline unlocks more quests for additional reputation.

[Arcane Remnant of Falanaar] and

[Arcane Tablet of Falanaar] both come from chests in

[110WQ] Withered Army Training, and after completing the mission.

These exiled Nightborne elves suffer withdrawals after being cut off from the Nightwell. They oppose their people's alliance with the Legion and fight for some kind of redemption.

Cut off from all sources of Arcwine, First Arcanist Thalyssra will have to be provided with

[Ancient Mana], along with Chief Telemancer Oculeth and Arcanist Valtrois (after they have been recruited) in order to feed them and allow them to keep functioning.

Each one has an Arcane Thirst meter that starts at 100 and slowly depletes to 1. As part of their quests, they will need to be sated once as an example mechanic. From 100 to 1 takes about one day, thus, they each have a daily feed requirement of 50 Ancient Mana. This will reward a unique one hour buff and 75 reputation.

Their state will be listed as Stable until their Arcane Thirst reaches 1, at which point they will be listed as Withering. When this happens, the quest giver will be starving, start trembling, and will not be able to do anything until fed. Once

[110] Friends On the Outside is completed, the buffs can also be purchased at any time; altogether, it is also at a discount at 120 Ancient Mana.

Note that for gameplay purposes, the quest givers will not actually become Withered if you do not do their daily feeding over a long period of time since such a change is said to be permanent and irreversible.