Nighthaven is the main settlement in the Moonglade. It is a primarily night elven village that is the home to the druids of the Cenarion Circle.

The village is located on the shores of Lake Elune'ara. It features night elvish architecture, some of it with stone walls.[1] It also has a pair of moonwells.[48, 33] 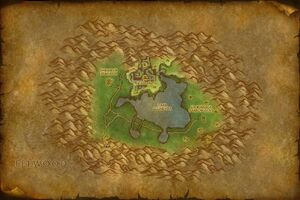 Nighthaven's location is considered remote and the village is usually sequestered to outsiders.[2] It caters mostly to druids, who have an ability to teleport here. Druids also have access to exclusive flight masters.[44, 45]

There are trainers for druidism and herbalism in the town, as well as a number of unique vendors, such as a specialty dress maker, Geenia Sunshadow. The village is also home to the Nighthaven Inn, which can be visited during the Kirin Tor Tavern Crawl.

The town is the center of the Lunar Festival, and for this holiday it opens up to outsiders. The druids welcome members of both the Alliance and Horde to celebrate and shoot fireworks - a symbol of Elune's power.[3] During the event, non-druids can also teleport here with a

[Lunar Festival Invitation]. For the duration of the festival, a number of special vendors and quests can be accessed here.

Centuries after the War of the Ancients, heroes gathered in the village of Nighthaven to face the maddened demigod, Omen. They managed to blind and drive the beast into Lake Elune'ara.[3]

It was here that the Keeper Remulos faced the Nightmare dragon, Eranikus. Nighthaven came under heavy attack by nightmare creatures before Tyrande Whisperwind arrived and used the light of Elune to cleanse the corrupted dragon.[4]

After the Cataclysm, the village was used as a gathering point for both Alliance and Horde heroes entering the campaign at Mount Hyjal.[5][6]

Nighthaven, the night elven capital, is located in the sacred Moonglade, on the slopes of Mount Hyjal.[7][8] This city once held the largest concentration of night elves anywhere on Kalimdor. Massive trees, ancients, and many forest beasts fill the surrounding woods. Nighthaven has survived for centuries despite demon and undead attacks, and the night elves protect their home fiercely.[9] The only current threat to it are deranged satyrs and feral furbolgs.[8]

Ancients living in the nearby forests once the had vital task of channeling forces of the land to sustain the night elves' immortality. Now they help train the warriors of Nighthaven and defend the village.[7]

During the War of the Ancients, Moonglade remained untouched, and after that war, the night elven druids went into deep mediation in the secure caves of the Barrow Dens. The remaining elves built the town of Nighthaven.[10]

The night elves are very cautious of whom they let enter the village. High elves are not allowed under any circumstances, and anyone smelling of arcane power is likewise turned away. Those allowed entry find Nighthaven hospitable, though a subdued and even eerie place. Night elves run the inns, taverns, and shops, and their way of life is rooted in nature. This spiritual heritage manifests in many small ways that foreigners may find unsettling — from how the buildings are constructed to mesh with the surrounding woods to a wildness that seems to lurk just beneath a quiet demeanor. While visitors may come and go as they please for the most part, they are never allowed near moon wells. In addition, any high elves seen near a moon well are attacked on sight.[9]

Nighthaven rests on the waters of Lake Elune'ara, in central Moonglade, with the Shrine of Remulos within a few minutes walk to the west. Several druids, Sentinels, and dryads have smaller camps outside the city walls.

Nighthaven is one of the greatest safe havens on Kalimdor and it is populated almost exclusively by druids, which also makes it one of the most concentrated sources of magic power on Azeroth. Since the druids here would make sure peace is enforced, it is a good meeting place between the Alliance and the Horde.[11]