This article is about the Nighthold and its lore. For the raid, see Nighthold (instance).

The Nighthold is a vast palace complex and the center of government in the nightborne city of Suramar. It stands as a testament to the progress and achievements of the nightborne civilization since its inception over 10,000 years ago. Today, it is the largest structure on the Broken Isles, and one of the grandest in all of Azeroth.[1] The palace is critically centered around the Nightwell, the font of staggering arcane power that has sustained Suramar for millennia.

For the vast majority of Suramar's history since the War of the Ancients, the Nighthold has served as the seat of power for Grand Magistrix Elisande and her regime. Partly occupied by demonic forces during the third invasion of the Burning Legion, the structure became a major target for the Nightfallen insurgents. During the rebellion's closing acts, the Nighthold was assaulted and stormed by the Nightfallen and their allies, who would ultimately succeed in defeating Elisande and driving the Burning Legion from Suramar.

The citizens of Suramar and the Nightfallen reunited, the Nighthold continues to act as the seat of Suramar's rulers and First Arcanist Thalyssra in the wake of the civil war. After the end of the Legion's invasion, the nightborne joined the Horde, and the palace became a launching point for many nightborne venturing out into the world for the first time. 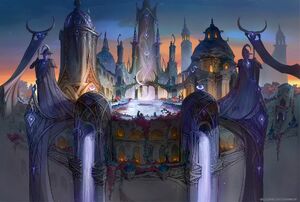 Suramar existed for millennia as one of the greatest cities of the ancient Kaldorei Empire. There, an elite group of Highborne sorcerers led by Elisande in service to Queen Azshara acted, often in secret, to secure their queen's position and expand her influence throughout Ancient Kalimdor.[2] During the War of the Ancients, the Burning Legion attempted to open a massive portal within Suramar City in addition to the one in Zin-Azshari in order to press their invasion. Elisande and her Highborne immediately took action, fearing the total destruction of their city. They stormed the Temple of Elune and used the powerful Pillars of Creation to seal the portal opened by the demons.

In the aftermath of this act, the Highborne of Suramar would harness the power of the Eye of Aman'thul to create an immense font of arcane energy, the Nightwell. Yet, believing the world doomed, Elisande and her allies fashioned a great magical shield over much of the city with their new source of power, cutting Suramar off from the rest of the world and beginning ten millennia of isolation.[2]

The Nightwell would take on a central role in the new society of Suramar's residents. Its energies transformed the Suramari into a new race known as the shal'dorei, or nightborne. For the next 10,000 years, Suramar flourished without outside interference. 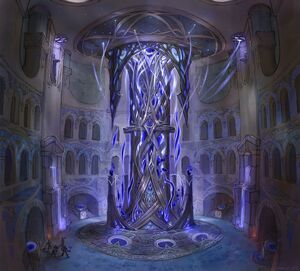 Over the centuries the proximity to the Eye of Aman'thul ensured that the essence of titanic power would dwell within the inhabitants of the Nighthold.[3]

When the Burning Legion commenced its third invasion of Azeroth, it emerged from the Tomb of Sargeras and quickly made contact with the nearby nightborne civilization in Suramar City. The orc warlock Gul'dan personally presented Grand Magistrix Elisande and the nightborne with an ultimatum: allow the Legion access to Suramar and the Nightwell, or face annihilation. Elisande, using the Nightwell's power, would scry countless possible futures, but every possibility led to doom. The only way the nightborne would survive was if they accepted the demons' offer. Despite an attempted coup from the First Arcanist Thalyssra, Elisande bent the knee to the Legion in the hope of saving her people.[4]

The nightborne lowered Suramar's shield and watched as the demons entered the city. Though her initial efforts to stop Elisande were a failure, almost costing her life, First Arcanist Thalyssra continued in her efforts to save her city. From the ruins of Shal'Aran, she would establish the Nightfallen rebellion and start a civil war in Suramar to bring down Elisande's regime. The Nightwell became the ultimate goal of the rebels. The harsh and often cruel response elicited by Elisande in trying to put down the insurrection would transform the Nighthold into a symbol of oppression.

While much of Suramar City suffered from the rationing of arcwine, a daily shipment was dispatched under heavy guard from the Twilight Vineyards directly to the Nighthold for Elisande's personal consumption. On at least one occasion, the convoy was attacked by insurgent forces, who took the valuable arcwine.[5] The Grand Magistrix very rarely left the palace. One opportunity arose in the Court of Stars, where the Nightfallen attempted to assassinate her and failed.[6] 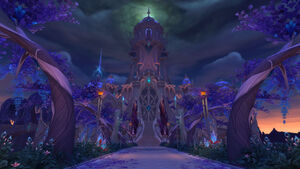 The Nighthold as it appears in-game

The rebellion would be reinforced by the armies of the Kirin Tor, the blood elves, night elves, and high elves. This united army subsequently laid siege to the city itself,. Advancing down the Concourse of Destiny, the mostly-elven army made a path directly for the Nighthold.[7][8] As they readied for the final assault on the citadel, a large image of Grand Magistrix Elisande appeared before the gathered combatants from the palace gates. She chastised and mocked the gathered elves, before releasing a powerful time-locking spell on the army, freezing them in place, neutralized.[9]

Despite the setback, Thalyssra and her allies worked to discover another route to penetrate the Nighthold, a breach deep beneath the Sanctum of Order that could grant access to the tunnels beneath the palace. Elisande, aware of this too, assigned her new First Arcanist Andaris Narassin to guard the entrance at all costs. Nevertheless, the Nightfallen were successful in seizing the breach and bringing down its magical barrier, slaying Andaris in the process.

Wasting little time, the Nightfallen and a small group of heroes began to work their way through the tunnels leading to the Nighthold, confronting and overcoming many foes along the way. They defeated the Chronomatic Anomaly that kept the above-ground forces frozen in place via Elisande's time-locking spell. These liberated forces joined the group of heroes, and together they assaulted the main courtyard and the entirety of the palace. Since the Legion's arrival, many demons had occupied the Nighthold, including Krosus, and the dreadlord Tichondrius. After fierce battles with each, they were ultimately overcome.

Many powerful nightborne champions also died trying to defend the fortress, among them Star Augur Etraeus, High Botanist Tel'arn, and Spellblade Aluriel, Captain of the Magistrix's Guard. Once all wings of the outer palace were secure, the invaders marched on the main tower housing the Nightwell. Within the Nightspire, Elisande finally confronted the insurgents in person, harnessing all the power at her disposal to wipe them from existence. In the end, the Grand Magistrix fell to her assailants. After her death, her echo would appear to confront them, expressing disbelief at their success in spite of her visions to the contrary. Finally, Elisande's echo resigned to throw her lot in with the invaders, promising to aid them in the final battle at the top of the Nighthold. 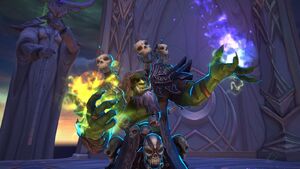 Gul'dan plots atop the Nighthold.

On the very peak of the Nighthold, the rebel champions, along with Archmage Khadgar, confronted Gul'dan as the warlock began a powerful ritual to finally place a portion of Sargeras's soul into the body of Illidan Stormrage. Gul'dan called on immense fel energies, bringing them fully to bear against his foes. Using his great newfound power, Gul'dan opened an immense rift in the physical universe to the Twisting Nether to allow his master to pass through, and further empowering himself. As Khadgar used the Pillars of Creation and Light's Heart to put Illidan's soul back inside his body, Sargeras himself took control of the body and The Demon Within revealed itself.

In the end, the heroes would triumph, as Gul'dan himself fell to the ground bereft of power and the portal flickered into non-existence. Illidan Stormrage, now returned to his body, grabbed Gul'dan, lifting him in the air, and overflowing him with fel energy. The death of Gul'dan atop the Nighthold signaled the end of the Nightfallen rebellion, and the Legion's occupation of Suramar.

Shortly after the victory over Gul'dan, First Arcanist Thalyssra visited the Nightwell along with Valtrois and Oculeth to decide its future. Without the Eye of Aman'thul to sustain it, the Nightwell had become unstable and was dying. Though Valtrois suggested repairing the damage, Thalyssra believed that it should be allowed to fade. Reasoning that the destiny of the nightborne no longer lays with the well, but with Azeroth as a whole, the Nightfallen thus let Suramar's historic source of power go.

Following the devastation of the civil war, the nightborne would establish a new government over Suramar City, headed by Thalyssra. Keeping with tradition, the new leadership based itself from the Nighthold palace. In the period after the eventual defeat of the Burning Legion on Argus, Approached by the sin'dorei of Quel'Thalas, Suramar would be convinced to join the Horde.

Their city repaired, many nightborne chose to venture forth from Suramar and explore Azeroth for the first time. These individuals began their new journey from the Nighthold, where they were briefed by Thalysra herself. Further highlighting Suramar's re-entry into the world, even pandaren monk trainers appeared in the Nighthold and taught them their ways. Portals were also opened there to Orgrimmar.

The following mobs will appear in the Nighthold until the Nightborne allied race is unlocked.