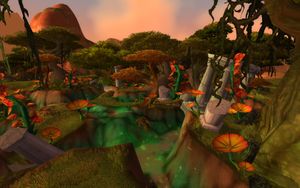 The Nightmare Scar is a location within the Overgrowth in the Southern Barrens that served as a rift to the Emerald Nightmare. Entering the physical world, the Nightmare's influence caused the plant life to grow uncontrollably and the wildlife to mutate. When Naralex discovered this, he and adventurers worked to seal the rift.

The forest contains night elven ruins where Naralex felt a great tragedy occurred at. It is also a night elf archaeology digsite.

The elven ruins may be the remains of Then'Ralore, a night elf outpost that, before the Great Sundering, was located in the area that would become the Barrens.