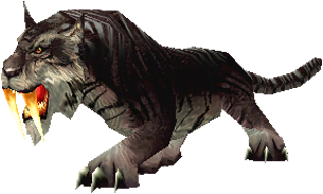 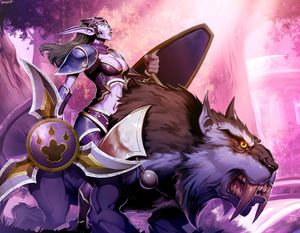 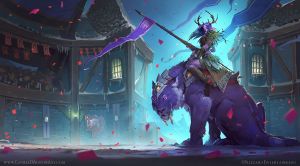 A Darnassus representative at the Grand Tournament.

Nightsabers are large saber cats found in Kalimdor, commonly used as mounts by the night elves. Elune made them silver and black so they could meld into the shadows on a moonlit night.[1] Many night elves revere these proud mounts because their shimmering coats symbolize the goddess of the moon, Elune.[2] When a night elf's mount perishes, it is custom for the rider to keep one of the saber's great fangs as a token of remembrance.[3] Considered one of Azeroth's perfect predators, these agile beasts can sprint through dense forests without making a sound.[4]

Before they were domesticated by the Sentinel Army and trained as mounts, Kalimdor's savage nightsaber panthers were considered to be among the continent's most vicious inhabitants. While many of these grand predatory beasts still prowl the dusky shores and forests of the night elves' homeland, the finest pedigrees of the species, recognized by their superior swiftness and agility, now serve a more practical purpose for those skilled enough to ride them.[5][6]

Night elves once believed that seeing the light-colored dawnsaber breed in the wild was an ill omen.[7] Some historians claim that the mistsaber's misty grey coat is the result of ancient Highborne experiments conducted on nightsabers.[8] Rumor has it that the stormsaber breed was named after the renowned archdruid Malfurion Stormrage.[9] Like their distant nightsaber cousins, tigers are renowned for their razor-sharp claws, incredible agility, and love of being scratched behind the ears.[10] Moonsabers come in pearl-bright color.[11]

Nightsabers are the traditional mounts of the Sentinels, and about as common among the elves as a riding horse might be in a human city.[12] Also known as a nightsaber cats or nightsaber panthers.[12] In combat, a nightsaber cat is a deadly foe, leaping from the shadows to rend its foes with its fangs and claws.[13][12]