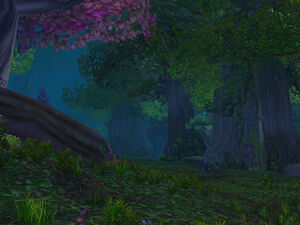 Nightsong Woods is the eastern part of Ashenvale forest, stretching from Raynewood Retreat and the road to Felwood in the west, all the way east to Azshara.

This is where most of the heavy cross-faction fighting occurs, and where the Warsong Clan and the Silverwing Sentinels have their holdings. The Falfarren River runs through the Nightsong Woods, roughly dividing it into a western Alliance-aligned part, and an eastern Horde-aligned part. A second, nameless river farther to the east separates Splintertree Post, which is the center of operations for Horde in the region, and Alliance-controlled Silverwing Grove from the easternmost part, which is probably the most contested part of Ashenvale: control over it is split between the draenei and night elven outpost of Forest Song, the satyr outposts of Satyrnaar and Xavian, the Horde-aligned Warsong Lumber Camp, and the Burning Legion controlled Felfire Hill and Demon Fall Canyon.

The southern reaches of the woods have experienced widespread deforestation at the hands of the Warsong orcs, who use the thick lumber in the trees for settlements and resources.