Nisha as she appears during most of the Vol'dun storyline, wearing her banner and sethrak-skull helmet.

Nisha is a reckless vulpera fighter that is encountered throughout Vol'dun and plays a leading role in the battles against the Faithless sethrak.

Nisha lived at what is now the Abandoned Burrows. She devised a plan to take the fight to the sethrak based on intel she gathered by surveying the sethrak compound and which she recorded in the form of a map.[1] She warned her caravan leader Kiro that the sethrak would eventually attack and that the vulpera needed to make a preemptive strike against the snakemen, but Kiro insisted that they instead keep their heads down and continue to do business.[2][3] Eventually, Nisha was proven right when a force of Faithless led by Fangcaller Sraka[1] brutally attacked the unprepared caravan at the burrows.[2][3]

Shortly after an adventurer arrives in Vol'dun, they are captured and imprisoned by the Faithless but are soon rescued by Nisha.[4] The adventurer accompanies Nisha as she kills sethrak around the Abandoned Burrows and helps gather equipment for her in the form of a vulpera banner she begins carrying on her back, a sethrak skull she equips as a helmet, and explosives.[2][3] After killing Fangcaller Sraka and retrieving Nisha's attack plans,[1] the vulpera and the adventurer escape to the Vulpera Hideaway using Nisha's wagon, with the hero lobbing explosives to hold off the sethrak.[5]

At the hideaway, the adventurer reunites with their companion Bladeguard Kaja, and the two eventually leave with Meerah to search for Warguard Rakera.[6] After finding Rakera, the group continues to the ruins of Zul'Ahjin,[7] where they once again encounter Kiro and Nisha. Nisha states that she and Kiro are headed to the Faithless empire to put her plan into action.

While the adventurer, Kaja, and Rakera ally with the sethrak Vorrik at the Sanctuary of the Devoted, Nisha, Kiro, Meerah, and other vulpera continue to the Faithless' stronghold in the north to take the fight directly to the sethrak out of Vorrik's Sanctum. Nisha and Kiro work to rescue vulpera slaves while Meerah organizes caravans to carry them to safety.[8] Some time later, the adventurer and Vorrik join up with them, and the hero aids Nisha in freeing and arming vulpera slaves in the Crater of Conquerors.[9][10] Nisha and the freed slaves then aid Vorrik in assaulting the Skycallers' Spire[11] and she ultimately helps Vorrik and the champion kill the Faithless ruler Emperor Korthek.[12]

Afterward, Nisha can be found along with Kiro and Meerah back at the Vulpera Hideaway, no longer wearing her helmet and weapons. She thanks the adventurer for everything they've done and encourages them to enjoy a moment of rest. 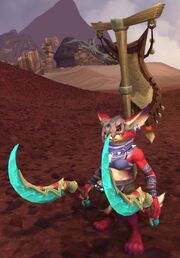 Nisha—now known as the "Fury of the Vulpera"—is present in Bonetrail Gulch during Faction Assaults, where she sends Horde adventurers to battle 7th Legion forces attacking vulpera caravans.[13]

The vulpera eventually decided to join the Horde in order to explore the world beyond Vol'dun. Nisha and Meerah accompanied Kiro as he traveled to Orgrimmar to speak with Baine Bloodhoof, but Baine was forced to decline giving them membership as troubles facing the Horde's current allies had stretched the faction's resources thin.[15] The vulpera decided to offer their help, with Kiro sending Nisha to Zuldazar in order to defend the southern coast against an invasion from the Nazeshi naga.[16] At the Dreadpearl Shallows, Nisha sent the Horde adventurer to disrupt the Nazeshi's operations and bring down the barrier protecting their leader, Tidecaller Nezara,[17] after which the two of them worked together to kill Nezara and her tidebreaker bodyguard, thus containing the threat to the coast.[18] Once all three vulpera completed their tasks and returned to Orgrimmar, Baine realized that he had been wrong to dismiss them so quickly and offered them a place in the Horde, which they gladly accepted.[19] As a member of the Horde, Nisha can subsequently be found standing in the Valley of Honor next to Kiro, Meerah, and Nilsa.

[110 - 120] Plans for Attack
The sethrak will regret ever attacking our caravan.

Vulpera Hideaway
Welcome to our home, <name>, at least for now.
The caravans are ready to move at a moment's notice, should the sethrak find our hideaway.

Zul'Ahjin
So we meet again.

What are you doing here?
Kiro and I are just passing through. Our next stop, the Faithless empire.
My plan is in place.
Those sethrak will never know what hit 'em.

Crater of Conquerors
The vulpera are ready. The Faithless will fear us.

Skycallers' Spire
The vulpera have your back, <name>.
Send any problematic Faithless my way and I'll deal with 'em. Happily.

If a player kills the Faithless mobs Nisha is fighting at the Skycallers' Spire:

Those were my kills. I'm counting 'em!

After killing Emperor Korthek during

[110 - 120] The Fall of Emperor Korthek
Now THAT was a battle worth singing about!
It is an honor to fight alongside you and Vorrik. I hope we can do it again soon.
There are always more Faithless to kill, afterall.

[110 - 120] The Fall of Emperor Korthek
Life won't ever be easy in Vol'dun, but it will be easier after our victories against the Faithless.
Thank you, <name>.
Rest and enjoy the hospitality of my people. Speak with the littles[sic] ones you have helped us rescue. Have a drink.
These moments of peace are what we fight for, and we must remember to enjoy them.

In Orgrimmar during the vulpera recruitment questline
Sure is good to be out of the sand.

Dreadpearl Shallows
This place is swarming with naga.

Valley of Honor
This place already feels like home.