[110EEWQ] Scourge of the Skies is available. He used to be a servant to the keepers, but broke free. Vethir wanted him dead for terrorizing the lands of Stormheim.

The great dragon Nithogg was once of the Thorignir, having left the brood shortly after they swore fealty to the titan keepers. Nithogg believed that one day he would be more powerful than even the keepers, and refused to be their subject. Instead, he took up roost in the mountain Nastrondir, where he raises his brood and terrorizes the nearby lands whenever the mood strikes him. 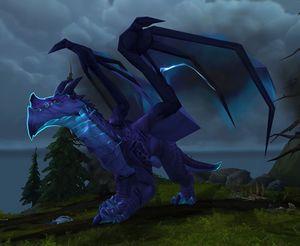 Nithogg in World of Warcraft.

Over the course of the encounter, Nithogg uses his powerful breath attack and a muscular tail! Avoid standing in front or behind him.