"Fear seeks to diminish you.
Instead, let it reveal you."[1]

Niuzao the Black Ox is one of the four creatures known as the August Celestials who watch over Pandaria. Niuzao watches over the Townlong Steppes and Dread Wastes and is sometimes referred to as the Western Celestial. He is the spirit of fortitude. He has been referred to as the strength of the west and protector of the weak.[2] As such, he is served by the Niuzao sentinels.

During Lei Shen's conquest of Pandaria, he and the mogu overpowered the four August Celestials. During this time, Niuzao showed fear when he was surrounded by an army of lifelike clay mogu that he had mistaken to be real. The mogu conquered the black ox that day.[3]

As Emperor Shaohao attempted to cross the Serpent's Spine, he was overcome by fear, afraid of the nearby Mantid. Niuzao spoke to him from across the steppes, telling him that if he was afraid, he should just follow his own feet and they would lead him to where he needed to go. This was exactly the advice the emperor needed, as the Sha of Fear's infamous ability was to make someone afraid to act even though it was certain they would succeed. Emperor Shaohao eventually found his courage when his friend the Monkey King was in danger, breaking away from the fear that would have prevented him from acting. 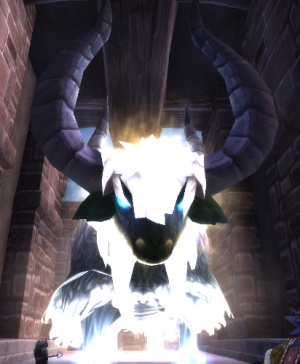 Niuzao in World of Warcraft.

Niuzao and the other three Celestials opened the gate to the Vale of Eternal Blossoms.

At the conclusion of Shado-pan rep quests, Niuzao is attacked by the Shan'ze clan of Mogu led by Shan Bu during

[90] Surprise Attack!. The Mogu attackers are defeated by the Shado-pan forces led by Ban Bearheart and Niuzao is freed.

He also granted his powers to the Golden Lotus warriors when the mogu invaded the vale after the death of Zhi the Harmonious.

As part of Wrathion's legendary journey, he and an adventurer visited the mighty Black Ox in order to get his blessing.

The trial of Niuzao is a test of bravery and fortitude. When Emperor Shaohao was overcome with fear, the Black Ox counseled him to face his fears directly. After a protracted battle with the Sha of Fear, the Emperor emerged victorious. To pass the trial of the Ox, warriors must be resolute in the face of overwhelming danger.[4]

[90] Why Do We Fight?, the celestials alongside the ghost of Shaohao, Lorewalker Cho and Adventurer gathered around to begin to heal the Vale. As he stands before the tree he knew in the end that the hero that caused the havoc on Pandaria and did set it right to be proved worthy.

Aftermath
<Niuzao nods approvingly at you.>

Niuzao and other Celestials chose to hold a trial involving the members of the Alliance and Horde rather than sentence Garrosh Hellscream among themselves. During the trial, Niuzao took the form of a strong, muscular tauren male as a show of respect to the gathered races.[5]

During N'Zoth's Assault in the Vale of Eternal Blossoms, he fights against Faceless Conquerors at the Emperor's Approach.

The Burdens of Shaohao part 3 - Fear
"Just follow your feet. They will know the way."

Niuzao may be the bull Wild God that Brann Bronzebeard speculates created the tauren.[7] The yaungol, which were actually the original bovine species and became the tauren and taunka later,[8] resemble him greatly.