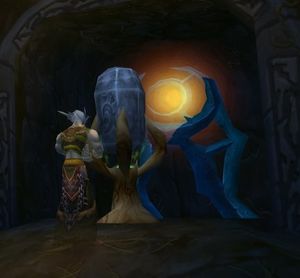 No Mere Dream is part of the Swift Flight Form quest chain.

Protect Clintar Dreamwalker's Spirit while it gathers the relics of Aviana, then speak to Dreamwarden Lurosa.

I cannot extricate myself fully from the Emerald Dream to help you, but a fragment of my spirit will guide you in your search for the relics. Guard it well, <race>, for it is a fragile thing.

The Emerald Dream itself has become an alien, dangerous place. Its grasp on me is strong, and I will not be whole until the Emerald Dream returns to normalcy. What you see around you is but an echo of the reality inside the dream!

You are fortunate that Clintar was strong enough to maintain the split in his essence for so long, <name>. Few druids can manage that kind of feat while under attack in Emerald Dream. Guard the relics well!

It has been reported that there is a bug that prevents Clintar's spirit from starting on its journey if you are in Cat or Bear form, but is apparently okay if you are in Moonkin or are unshifted.

You will visit 3 relic sites. Note that Clintar's spirit really is pretty feeble; you will need to get aggro all along the way. On the plus side, only the last site has more than one foe, the first two sites can be easily handled. On the down side, the spirit will get aggro from further than you will, and you will need to work a bit to take mobs off of him.

Somewhere between the second and third relics (or at either site), you will also encounter an Aspect of the Raven.