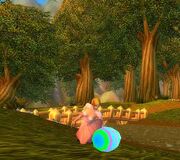 Ji-Kun's eggs during the week of Noblegarden.

Noblegarden is an Easter event, taking place around the real-life holiday, based on the Western interpretation. Thus the event can occur anytime from the end of March to the end of April. Players can search for colored eggs hidden around 4 towns close to each race's starting area. Noblegarden starts on Easter Sunday, and lasts for one week.

The great feast of Noblegarden has long been celebrated by the races of the Alliance and recently adopted by those of the Horde. On this joyous day, it is customary for the nobles and lords from each race to hide coins, candy, and the occasional treasures within special eggs painted to look like wildflowers. These eggs are then scattered around the major cities for the citizenry to find. From heroes to commoners, and everyone in between - the feast of Noblegarden is meant to bring communities together to share the joy of life and friendship.

Noblegarden is a seasonal event, whose achievements contribute to its meta-achievement,

[Noble Gardener], which is a part of

[What A Long, Strange Trip It's Been]. Noblegarden is unusual for a seasonal event in that its meta-achievement can be accomplished by low-level characters. It's conceivable that a level 1 character could complete all of the achievements, though some of them will be challenging for characters under level 40.

Gathering Brightly Colored Eggs is the central activity of Noblegarden. These eggs are hidden in and around the starting area towns, and contain

[Noblegarden Chocolate], with a chance of containing one of the items that the Noblegarden vendors sell. There's also a chance when collecting the egg that you will gain a buff that transforms you into a rabbit for 1 hour.

They are found in the following locations:

Egg-gathering is made easier with the help of the

[Egg Basket], which provides a speed buff wherever eggs can be found. It levels the playing field against classes with inherent unmounted speed buffs, such as druids. The basket can be acquired with the quest

The following quests are available for Noblegarden:

[Noblegarden Chocolate]. Vendors can be found at each of the eight event sites.

[Noble Gardener], itself a part of

[What A Long, Strange Trip It's Been].

This is a strategy specifically for the achievements listed above.

Head to your favorite city of choice. Your mission now is to collect 355 eggs. If you collect any of the following (from finding inside eggs, or borrowing a tuxedo from a friend) you can subtract the amount listed from 355. Do not purchase anything until the end, to minimize the number of eggs you gather. If you are a mage, be sure to add an additional 100 if you are interested in the

[Tome of Polymorph: Rabbit]. If you are also going for the

[Mystical Spring Bouquet], add another 600 but again if you're lucky, you could have one drop instead while gathering for your achievements. Playing with others will allow you to share

There are generally two strategies for collecting eggs as fast as possible. You can equip your

[Egg Basket], bind it to a key or button, and keep its buff up as much as possible, running around picking up eggs. Some people prefer camping instead - finding a spot with a lot of spawn points to minimize movement. Since they do not stack, eggs need to be opened as you gather them in order to avoid running out of space in your bags; the chocolates yielded do stack. It's also easy to work on the

[Chocoholic] achievement as you go by eating your first 100 chocolates. Once you have all of your eggs, you should now purchase or borrow from friends any remaining items.

Here are some tips for the remaining achievements:

[Black Tuxedo Pants] and kiss someone wearing a

[Elegant Dress] (baby pink colored dress). People are commonly wearing these dresses in the event area, and in Dalaran. Both males and females can wear the clothing for it to count for the achievement (so you don't specifically need to find a female character wearing the dress, for example) and all 3 items can be traded.

[Chocoholic]
Eat 100 Noblegarden Chocolates. You can do this while gathering eggs.

[Desert Rose]
Visit Badlands, Desolace, Tanaris, Thousand Needles, and Silithus. Once you land, use your

[Spring Robes] to plant your rose and take off again. This can be achieved using flight masters, but flying manually allows players to complete steps of

[Hard Boiled]
Group with a friend who has a

[Blossoming Branch] with charges remaining and use a charge in the Un'goro Golakka Hot Springs subzone. If you sit still, you should lay an egg in a few minutes. Alternatively, have your

[Hearthstone] set to Dalaran, Gadgetzan or Silithus, hearthstone when you collect a rabbit buff, then run (or should I say hop) to Un'goro. You will not be able to use a taxi, but you can use the Portal from Dalaran to Caverns of Time.

[Noblegarden Egg], place it on the ground in either

Stormwind City. You can then immediately loot this egg for extra chocolate and the chance of a drop.

[Shake Your Bunny-Maker]
Every 5 minutes, you can use your

[Spring Flowers] on a female of each faction.
Stormwind and Orgrimmar are generally the most populous areas to find members of your own and the opposing faction. Spring Flowers can be used while mounted, so eagle-eyed players can target hostile females from above the range of the flying patrols before swooping down to plant some ears. The 5 minute cooldown on Spring Flowers should be used to find the next female on your list, taking care to keep track of her until the cooldown expires. If you're having trouble finding a race, remember to check all areas of the city, or try other faction cities, Dalaran, or battlegrounds such as Alterac Valley. The event sites are also worth trying for less popular races. For friendly females, you can always ask in your guild or in trade chat.

[Spring Fling]
Travel to the four event sites for your faction, and walk up to someone else's pet rabbit. After a few seconds the "magical cycle of life" should take place.

[Sunday's Finest]
(This is not required for the meta achievement.) This is an RNG based achievement.

The subject of this section was removed from World of Warcraft in patch 8.1.0.

To be able to identify race and gender for shapeshifted druids, gender-ambiguous blood elves, or if you simply have poor vision, here's a macro:

Target a character, and when activated the macro will print in the chat window whether it is male or female, the level, the race and if it has the Sprung buff already or is clear. From the information given you must decide yourself if you want to shake your bunny maker at it. When copy/pasting the macro text, be sure to remove a possible space before the "/run".

Since patch 8.1.0, the players can be male or female to obtain the achievement but still requires them to be at least level 18 or higher.

Being helpful to others

To help other players get their achievements, you can do the following things:

The subject of this section was removed from World of Warcraft in patch 8.1.0.

In 2009, the schedule for Noblegarden was changed since it was delayed.[1]

Many players may have noticed that Noblegarden has been removed from the in-game calendar. While the event is not being removed from the game, it is being delayed slightly and will not occur as originally scheduled on April, 12. We will be implementing this event at a future date, however.

There have been many additions made to the event including a change to the length of which the event runs (1 week) and additional content for players to enjoy. We look forward to sharing this new experience with you.

In the official Blizzard scenario map for Warcraft III called "Funny Bunny's Easter Egg Hunt", Easter Bunnies and Evil Bunnies come out around the time of Noblegarden to find eggs. They compete with each other to find as many eggs as possible, valuing rare golden Easter eggs. They live in Easter egg houses.