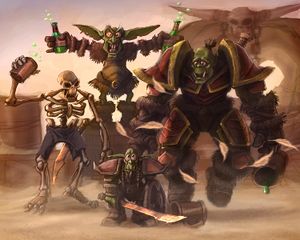 Noggenfogger in action. (From the World of Warcraft Trading Card Game)

Noggenfogger Elixir is a consumable, originally only available after completing the

[49] Noggenfogger Elixir quest from Marin Noggenfogger in Gadgetzan. After the Cataclysm, he married Sprinkle and the elixir is available for purchase from her at anytime to anyone.

Consuming this potion has a random special status effect:

The different effects will stack if you consume multiple Noggenfoggers, so you can be, for example, a tiny skeleton.

This dark green substance resembles an oil at first glance. It is so thick and viscous that some feel imbibing it is more like eating an oyster — the stuff must be swallowed whole. The renowned goblin alchemist Marin Noggenfogger was the first to create this bizarre concoction. The elixir requires a variety of strange ingredients, including the moisture found within the exceptionally rare thistleshrub dew collectors found only in the Tanaris Desert. The means to create Noggenfogger elixir is a secret known only to a few goblin alchemists, who guard the secret jealously. Noggenfogger elixir is typically sold in bottles of 5 doses, although this varies depending on the vendor.[1]