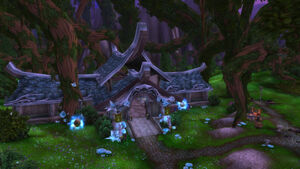 is the inn beneath Nordrassil atop Mount Hyjal. This is also the main base of operations for the Guardians of Hyjal.

During the Burning Legion's third invasion, the inn was slightly damaged.[1]

This building may have been here since the Battle of Mount Hyjal, as one exists close to this spot in the Night Elf Village.

While the building itself has always been there, it was given its own subzone.