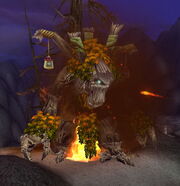 Nordu is a level 85 elite ancient located in The Flamewake, Mount Hyjal. Ysera calls Nordu the oldest of the trees. He has stood in the center of what is now The Flamewake for thousands of years. His wisdom is as old as the mountain itself.

He has been burned down to the core and will not last much longer, but before he dies he wishes to pass on his wisdom. He died prior to the events of the Firelands Invasion, and the hill he stood on was named after him in his memory.