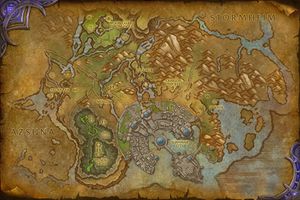 She is still in there, <name>. Noressa, my wife.

She is in the Promenade while we wait outside, preparing to strike. Who knows what has happened to her?

Please, friend, I fear the worst. Tell her there is hope outside.

We had a small house in the south of the Grand Promenade, by the water gardens. She will probably be there during this madness.

You must find her!

I cannot possibly thank you enough. We will be reunited, and I will see that we are never separated again.

This quest can be done during "A Growing Crisis" even though Absolon recovers after it.

This quest is not part of the "Crafting War" segment but simply an optional extra quest that is also available much earlier (as mentioned above).

NOTE: If you do this before the Crafting War questline, you will not be able to do the optional introductory quest

Inside the house marked as the quest location, there is a Felborne Sorcerer. Kill him, then talk to Noressa, who is kneeling by the wall.

Noressa says: It is.. you! You delivered the letter!
Noressa says: I can make it to the border. Thank you. Tell Absolon I am coming!

Return to Absolon. If you do not find him at his former location in outdoor Meredil, look in Shal'Aran.

Quest completion
Noressa spawns in the direction of the road and runs up to Absolon.
Noressa says: Absolon! What happened to you?
Absolon says: Noressa! I thought I would never see you again...
Noressa says: Tell me everything that happened. About our daughter...
She cries.
Absolon says: Yes, you deserve to know. Let me show you our new home...
The two walk away.

After completing this quest, both Noressa and Absolon — now a healthy nightborne rather than a nightfallen — can be found together among other refugees in Shal'Aran.