For the US realm, see Server:Norgannon US.
Not to be confused with Gorgannon. 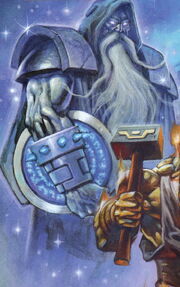 Norgannon in the Warcraft Saga

Norgannon (pronounced /ˈnɔːrgəˌnɔːn/) was a member of the titan Pantheon and Keeper of Celestial Magics and Lore.[1][2]

Like the other titans, Norgannon was born from a world-soul somewhere in the Great Dark Beyond, and thereafter joined the Pantheon's quest to order the universe and find others of their kind.

Just prior to the war against the Old Gods on Azeroth, the titans, fearing that their enormous bodies would severely harm Azeroth's world-soul crafted the titan-forged to wage war in their stead. Norgannon imbued a potion of his intellect and mastery over magic into keepers Loken and Mimiron.[3] After the defeat of Galakrond, Norgannon used Loken as a conduit to channel his power into Malygos, gifting him with powers over arcane magic.[4]

When the traitor Sargeras, former defender of the Pantheon, began his Burning Crusade to scour the universe of life, the Pantheon confronted him near the world of Nihilam. Their attempts to reason with him failed, and instead Sargeras killed his former student and friend, Aggramar. Enraged by this murder, the Pantheon launched an all-out assault on the fallen titan and his Burning Legion, but could not stand against his fel might. Just as Sargeras summoned a great fel storm to finish the Pantheon off, Norgannon wove a protective shroud around the Pantheon's souls, launching them into the Great Dark just as their bodies were destroyed.[5] The spirits then slammed into the Keepers of Azeroth.[6]

Sargeras would eventually capture the spirits of the Pantheon, except for Eonar who escaped. Aggramar succumbed to Sargeras's torture and was revived as an avatar[7] on the planet Argus to serve the Burning Legion. Aman'Thul, Khaz'goroth, Norgannon, and Golganneth were tortured by the Coven of Shivarra with the goal of breaking them as Aggramar was. After Argus the Unmaker was defeated, Sargeras struck out at Azeroth and wounded her heavily in Silithus. Immediately thereafter the Pantheon imprisoned him within the Seat of the Pantheon. Illidan Stormrage, who stayed behind while his comrades left, serves as Sargeras's jailer. 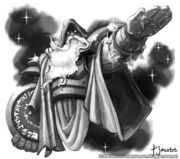 The blank expression on this platinum-skinned titan's face is unreadable. Arcane power emanates from him like a tangible force, making skin prickle and hair stand on end.[10]

Norgannon is a male Aesir titan. His class is Wizard.[11]

Lord of mysteries and master of arcane magic, Norgannon is the ultimate keeper of secrets. Though titans usually avoid the arcane's corrupting nature, Aman'Thul charged the implacable Norgannon to catalogue all spells and magical currents in the universe — the Dreamweaver's knowledge will, hopefully, enable the titans to better understand and defeat the Burning Legion and their other enemies. Norgannon knows almost everything and is utterly passionless. He is the definitive magical historian.[10]

Norgannon's portfolio includes arcane magic, knowledge, secrets and mysteries. Though his name is generally unknown on Azeroth (so far), spellcasters on many worlds revere this paragon of their craft. Some whisper his name whenever they cast a spell, while others beseech his protection against the corruption of the arcane.[12]