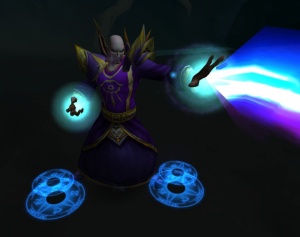 Normantis is a human mage. During the war against the Lich King he was a member of the Kirin Tor located in Borean Tundra in Northrend known as Librarian Normantis. By the time of the third invasion of the Burning Legion, he was ousted from the Kirin Tor and moved to Azsuna on the Broken Isles and is known as Normantis the Deposed.

He can be found on the second floor of the mage tower on Amber Ledge in Borean Tundra. The Kirin Tor has a code of conduct that frowns upon "extreme" interrogation techniques, so Normantis needs the assistance of someone outside the Kirin Tor, namely the adventurer, to question the Imprisoned Beryl Sorcerer. During the torture, Normantis busies himself by sorting nearby books.

Sometime following his appearance he was thrown out of the Kirin Tor and moved to Azsuna. Determined for any and all blue dragons to pay for the Nexus War, he is found at Lair of the Deposed where he imprisoned Zeros.

The Kirin Tor isn't allowed to torture people, so you'll torture them for us and it won't be immoral anymore, for some reasons. 100% ethical, Kirin Tor approved.