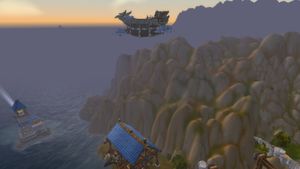 The Northern Elwynn Mountains is an area of Stormwind City, directly north of Stormwind Harbor. Besides the Harbor, it is also adjacent to Stormwind City Outskirts and Elwynn Forest. The Skyfire, refurbished as an aircraft carrier, lies hovering in this area.

The mountains north of Stormwind hold some nastier sorts of beasts that will sometimes venture south to see what they can pick from the road. The passage is no stranger to harpy attacks, and even dire wolves are spotted north of the city. The locals assume the creatures have escaped from the Blackrock orcs in the Burning Steppes.[1]