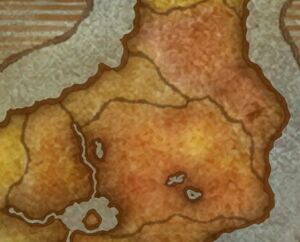 World map of the area. 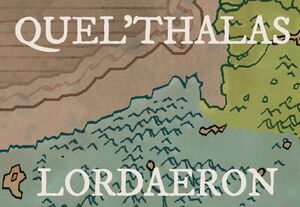 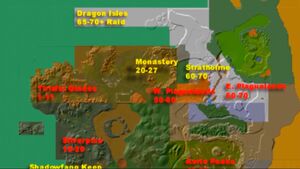 Lore-wise, this area may have been part of the fallen Kingdom of Lordaeron, or of the Kingdom of Quel'Thalas. According to the map in World of Warcraft: Chronicle Volume 2, this area straddles the boundary between both kingdoms and has a bay in it which should be the location of the port of Stratholme. Moreover, this region must be the place where the Thondroril River is born geographically.

"Northern Lordaeron" has appeared in the maps since vanilla. But otherwise, it has never been referred to, apart from a small easter egg in the form of the

[Gloves of Northern Lordaeron]. The whole region is found within the limits of the unfinished zone of Quel'thalas, and trying to reach it (which can only be done by unconventional means) will tell you that you are in "Quel'thalas" instead. This is because the borders of "Northern Lordaeron" are only drawn on the world map, and there is no other evidence in the game.

As seen in the World of Warcraft: Looking for Group documentary, the area of Northern Lordaeron was originally going to contain a raid zone called "Dragon Isles", designed for players at level 65 - 70.

Currently, the only areas of notice found within "Northern Lordaeron" are the uninstanced copy of Stratholme, and some elven ruins on the coast.

Due to the revamping of Azeroth to accommodate flying mounts in Cataclysm, the area was textured and sparsely filled in with mountains and grass. It was expanded on the Eastern Kingdoms map, but the actual area was unchanged. However, an invisible wall was placed all around the zone, so that was impossible to reach it in any way, flying included, unless terrain exploits were used.

In Battle for Azeroth, after your character has done the Battle for Lordaeron, the invisible walls disappear allowing you to travel freely the region, but otherwise, nothing has changed. 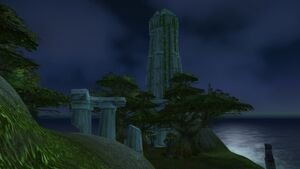 The architecture of the area (a tower, a dock, and a few other buildings) is based from night elven designs found in Teldrassil and other areas, perhaps implying that the high elves made use of it prior to founding their own culture in Quel'Thalas. It is important to note, however, that these buildings have been present since the game's initial release before Quel'Thalas even existed in-game, and are probably just a leftover.

This could be the land that Daval Prestor (a human disguise used by Deathwing) claimed to have originated from during the Second War as he was described as being from the north of Lordaeron.[1]

It could also be the land of the "northern vassals" whom Terenas's grandfather helped in their negotiations over their borders with the elves of Quel'Thalas.[2]