Northern Stranglethorn is a new zone in Cataclysm as the old Stranglethorn Vale was split in half after the Shattering. At the bottom of this zone, the remaining whirlpool can be seen. Players learn about the political changes in Zul'Gurub, rescue an adorable raptor, and partake in Nesingwary's expanded hunting operations. 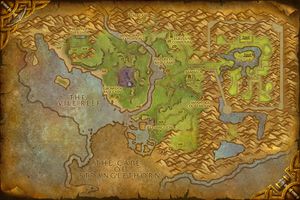 Flight paths from Grom'Gol Base Camp 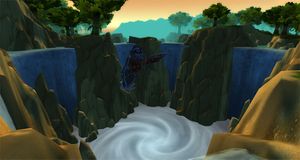 The Sundering in Stranglethorn Vale literally split the zone in two. 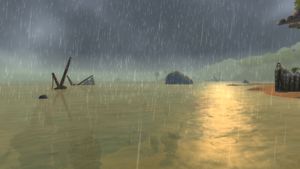 Northern Stranglethorn is a level 20-25 zone in southern Eastern Kingdoms for both the Horde and Alliance. It starts out separated, with the Alliance going to the Rebel Camp in the north and the Horde going to Grom'gol Base Camp on the eastern coast. The overarching story for the whole zone revolves around a Lashtail Hatchling. Nesingwary and his crew still offer the quests involving hunting the local wildlife.