Not to be confused with Dragon Isles. 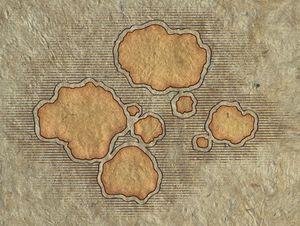 The northern islands in the World of Warcraft World Map poster.

The northern islands is an archipelago north and slightly east of the Maelstrom, usually close to Tirisfal Glades in the Eastern Kingdoms and Northrend. They appeared on most world maps, dating back to the Warcraft III manual, but have yet to have names or significant information.

The islands do resemble the Broken Isles from Warcraft III, however, the Broken Isles are very close to the Maelstrom while the northern islands are further away. Moreover, they may have been shown as different things on at least one very early concept map.

In Wrath of the Lich King, these isles were removed from the overworld map, as they occupied the same area as Northrend, albeit, they are still present in the cosmic map, which also includes the northern continent. It is possible that they were simply there to help fill an empty map, but their former consistency was notable.

As of Legion, it seems that the Broken Isles indeed match the former location of these islands. However, the northern islands and the islands that the RPG called the Broken Isles have seemingly been on the map at the same time since Warcraft III, though that island may be Balor or the Darkspear Islands instead.