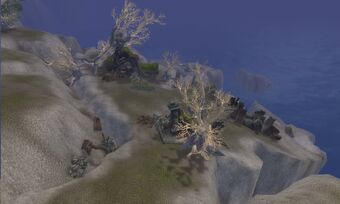 Northeron was a region[1] and the northernmost part of the Twilight Highlands.[2] It was known for its mysterious ironwood tree forests,[3] the torrential storms from its frozen mountains,[4] ominous and foreboding peaks,[5] and jagged ice cliffs.[6]

Some of the Wildhammer gryphon riders who fought in the Second War hailed from this place,[5] including Kurdran Wildhammer.[7]

After the War of the Three Hammers and the loss of Grim Batol, the majority of the Wildhammers were led by Khardros Wildhammer to the Hinterlands. Some decided to settle in Northeron instead.[1]

During the Second War the region was attacked by the Old Horde. The dwarves of Northeron offered the service of their gryphon riders to the Alliance to assist in the decimation of orcs that desecrated their homeland.[5]

While working in a mine, Carrick Irongrin received word of an orcish attack and rushed to his home. From atop of a hill Carrick saw how the Dragonmaw clan orcs, mounted on their enslaved red dragons, descended on his burning village while dwarven gryphon riders battled them. The dwarf ran down the hill to his burning home but it was already too late. His daughter, Rhona, was one of the casualties.[8]

In the Cataclysm brought about by Deathwing, Northeron's famed icy cliffs rapidly melted due to the catastrophic climate shift, and most of the independent dwarves who lived there were killed in the subsequent buildup of Twilight's Hammer forces and the emergence of Iso'rath. Some of the wreckage is still visible along the northern coast.[39, 9]

Even though most of Northeron was destroyed, the nearby spiritual center of Kirthaven remained intact.[2]

In Warcraft Adventures: Lord of the Clans

In the canceled Warcraft Adventures, one scene would have had Thrall interacting with Wildhammer clan dwarves in an area known as Northeron Pass (Aviary in the map), which was a dwarven aviary northeast of Tyr's Hand.

A ballista and a cannon tower were nearby, and the aviary contained a forge, a harnesses and shields workshop, as well as a gryphon roost.

It is not clear what the original extent of Northeron was. Blizzard stated that its remains are in the northernmost part of the Highlands, indicating that the unnamed ruins there were a town within Northeron once. It is also stated that Iso'rath and the Twilight's Hammer forces served to put an end to this location and its many inhabitants.