Northshire Valley is a pristine valley in Elwynn Forest in which both Northshire Abbey and the Northshire Vineyards are located. This is where the human starting area is located, though the serene valley is visited by adventurers from all over the world.

During the Second War, the site of Northshire Abbey was the headquarters of Cho'gall's Twilight's Hammer clan, allied to Gul'dan.[1]

The guards of Stormwind had trouble maintaining the peace in Northshire Valley, due to an increase in activity from various threats. Deputy Willem noted an increase in the number of wolves inhabiting the woods, Marshal McBride reported a faction of kobolds infesting the areas in and around Echo Ridge Mine, and Milly Osworth feared for her vineyard at the hands of Defias Brotherhood thugs.

Northshire Valley, including the Northshire Vineyards, were invaded by Blackrock orcs and Goblin Assassins during the Cataclysm and Alliance heroes had to fight to repel them.

Northshire Valley is surrounded by impenetrable mountains, with the exception of a pass to the south which is protected by thick stone walls and a guarded entryway. A river runs through the valley, which eventually exits Northshire and empties into Crystal Lake. 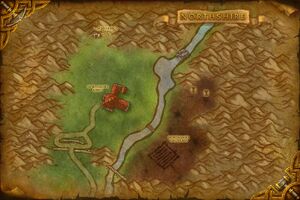