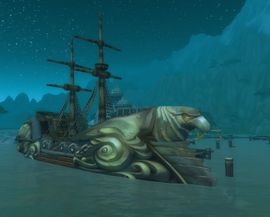 The Northspear is an Alliance destroyer that served in the Alliance navy as part of the Northrend campaign. Assigned to support the Valiance Expedition in its offensive against the Undead Scourge, the vessel provided transport between the Eastern Kingdoms port of Menethil Harbor, and the base at Valgarde in the Howling Fjord. As an icebreaker, it was specially-designed to be able to tackle the harsh conditions of the frigid continent of Northrend.

Along with the Kraken (based from Stormwind Harbor), the Northspear offers the primary non-magical transport option to Northrend. Throughout the war, it was known to ferry many Alliance heroes to the continent, to continue the war against the Lich King.