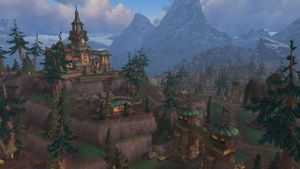 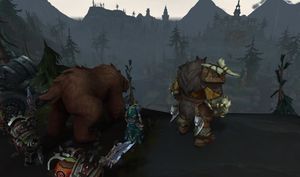 Rexxar leads the Horde to attack the Estate. 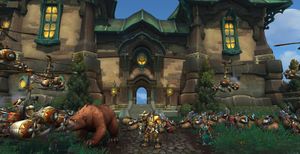 The Horde amassing the Azerite.

The Norwington Estate (or Norwington Manor)[1] is the property belonging to Lord Aldrius Norwington and Lady Elena Norwington in Tiragarde Sound. They host the annual Norwington Equestrian and Hunt Festival for equestrian riders and hunters from all over Kul Tiras,[2] attracting nobles and the Roughneck riders. The land the estate was built on was originally inhabited by the Grimestone troggs, but Lord Aldrius' grandfather drove them out and forced them to settle in the nearby Mistfall Cleft.[3]

Lord Stormsong ordered his cronies to steal the horse Goldenmane from the estate.[4]

Later, the Alliance chose to use the estate as a testing ground for their Azerite weaponry.[5] As part of the War Campaign, Horde forces led by Rexxar attacked the estate in order to collect its caches of Azerite and Azerite weapons.[1] Aside from the Kul Tirans, it was protected by the footsoldiers from the Stormwind Army, the Lightforged draenei paladins and their warframes.[6] The Horde slaughtered the defenders and gathered the Azerite in front of the manor in order to be transported.[7] However, the Alliance reinforcement came and surrounded the Horde force. The Horde retaliated, and the adventurer started shooting at the Alliance soldiers with Azerite munition from a gyrocopter while the rest of the Horde successfully escaped with the Azerite.[8]

Afterward, Lord Admiral Jaina Proudmoore asked SI:7 to investigate the incident, and a final report was delivered to her by the Alliance emissary from Master Mathias Shaw.[9]