Not Fit to Swarm 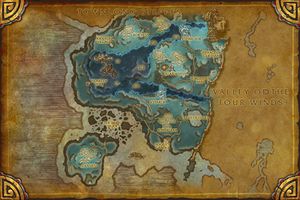 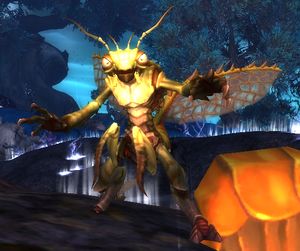 Newly hatched mantid have only two instincts: kill and feed. They turn on one another, devouring the weak and leaving the strongest to mature.

Those hatched during a swarm - the swarmborn - are turned loose on our enemies instead.

The swarmborn in the Clutches of Shek'zeer have been tainted. They are born into shadows and nightmares. Driven by terror, not hunger.

They are not fit to swarm. They must be purged.

Let me know if you want to be dropped into a sea of swarmborn. It would entertain me greatly.

Their eggs should have basked in the warmth of the sun and the song of a million wings for ten more years.

The Empress will pay for her crimes.

[90] Amber Arms before heading out. Then speak with Kil'ruk again:

I trust in the will of the Klaxxi. They know what is best for our people.

Adventurers are buffed with Angel of Death: "Granted by Kil'ruk the Windreaver. When you gather at least 2 enemies within 10 yds, Kil'ruk will assist with Reave. This cannot occur more than once every 60 sec. Only one Klaxxi Enhancement can be active at a time. Only effective in Dread Wastes. Reave - Kil'ruk cleaves nearby enemies dealing 118182 damage instantly and causing them to bleed for an additional 118182 damage over 10 sec."

Should any unfortunate mantid be in the area where players land, they find themselves one-shot via Sonic Divebomb, which deals ~550,000 Physical damage!

First things first, run just to the northeast and interact with the Inactive Sonic Relay. This will complete Dead Zone and start

[90] In Her Clutch automatically.

Start moving southeast killing bladesworn, clutch-keepers and swarmborn along the way. Note the Sha-Haunted Crystal in the middle of the spawn clutch. It starts

[90] A Source of Terrifying Power. Pick it up, then interact with the Ancient Amber Chunk, and prepare for a fight:

Malik the Unscathed says: I am returned. I heed the call of the Klaxxi.

Wrap up then head back to Klaxxi'vess.