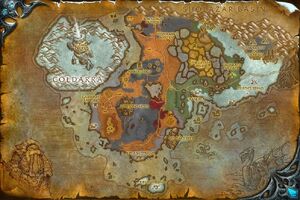 The gnomes here report that troggs came down from the north and started attacking everygnome and everything.

So now it's our job to fix this situation! And luckily, I have the perfect plan for it. We need to calibrate the bomber's gun, and doing so on the ground is much less risky than up in the air.

Give it a go, Commander!

<The troggs in the area seem to have been dealt a serious blow.> 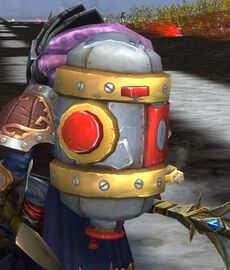 On accept, you are automatically granted the Prototype Weaponry buff, visually represented by a large device on your character's back:

This gives access to the following Extra Action Button:

Prototype Bomber Gun — Fire something out of one of the three barrels on the contraption. What could go wrong?

When used, the bomber gun has three possible effects: firing a rocket which instantly kills the target; a laser attack which jumps to all enemies near the target and kills them as well; or launching a G-5 CANARY, which runs around for a few seconds and taunts all nearby enemies before detonating and killing them. The gun can be used on any enemy target, not just the troggs, and does not need to be used to gain quest credit. Despite the quest objective only listing Ironbound Brutes, you also gain credit for killing Ironbound Scrapthrowers.