This article is about the lore. For the instanced raid, see Ny'alotha, the Waking City. 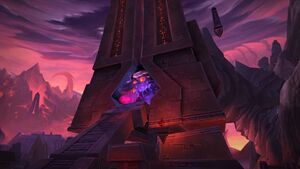 Ny'alotha, referred to as the sleeping city or the dreaming city, is the domain of the Black Empire, a dimension inhabited by the Old Gods and their minions. After being freed from his titan prison during the Fourth War, N'Zoth began trying to tear down the veil separating Ny'alotha from the physical world, unleashing nightmares and visions of a future in which the forces of the Old God are ascendant unto Azeroth.[1][2]

Awakened affix in Mythic+ has obelisks throughout the dungeon that allow characters to enter Ny'alotha and confront powerful servants of N'Zoth.

The events within the Eternal Palace have set the stage for the Old God N'Zoth's release from his titanwrought prison, Ny'alotha, the Sleeping City, has awakened. Under N'Zoth's command, the armies of the Black Empire threaten to engulf the world and reshape it according to their master's vision. Nightmares dwell in Ny'alotha, the Waking City the Void-shrouded heart of the ancient Black Empire. The champions of Azeroth venture deep into the horrific realm to confront mad heralds and inscrutable horrors, and ultimately go eye-to-eyes with N'Zoth himself for one final confrontation against the Old God in a fateful battle for Azeroth's survival.[3]

Before Ny'alotha was released in patch 8.3, it had been mentioned by various objects and servants of the Old Gods since Cataclysm.