This article is about the instance. For the lore, see Ny'alotha. 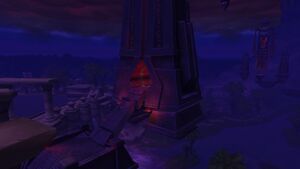 The entrance to Ny'alotha in Uldum. 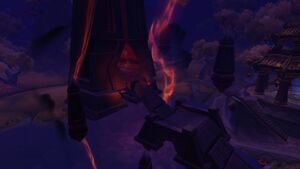 The entrance to Ny'alotha in Vale of Eternal Blossoms.

Ny'alotha, the Waking City is the final raid instance of Battle for Azeroth. It was introduced in patch 8.3.0 on January 14, 2020.

The raid entrance is located in a large floating obelisk located above either Whitepetal Lake in Vale of Eternal Blossoms or Vir'naal Dam in Uldum, depending on which zone is currently under assault from the Black Empire.

Ny'alotha, the Sleeping City, has awakened. Under N'Zoth's command, the armies of the Black Empire threaten to engulf the world and reshape it according to their master's vision. Only one hope remains: using the repaired titan forges to eradicate the Corruptor once and for all. But in order to target N'Zoth with the forges' power, the champions of Azeroth must venture deep into the horrific realm for one final confrontation against the Old God.

From his dark throne, N'Zoth concocts visions of a future where Azeroth has fallen, and none are left to resist his empire.

Within their black halls, N'Zoth's devoted perform profane rituals to bring about the end of the world.

Buried deep within a fissure of twisted flesh, Il'gynoth's corruption continues to spread from this realm into the next.

Deep within his monument of filth, lies the corruptor, and the final confrontation that will determine the fate of Azeroth.