Obelisk of the Stars 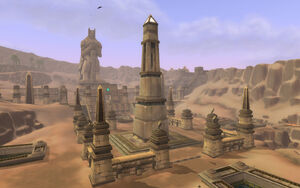 Obelisk of the Stars. 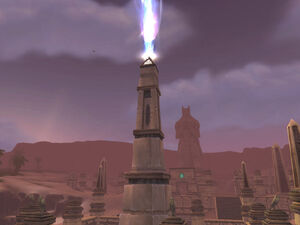 Obelisk of the Stars is one of three obelisks in Uldum that were once used to mask the area from the outside world.[1] They also guard an ancient Titan relic. Beneath the obelisk, from four possible entrances, is the Chamber of the Stars.

The sand pygmies of the nearby village roam the area with their hyena companions.

The Obelisk and Chamber of the Stars have been occupied by the Amathet, a group of tol'vir who believe only they can protect the titans' works. They have activated a solar device here known as the Engine of Ascension, which will activate Reply-Code Omega and use the Forge of Origination to wipe out the Old Gods - as well as all other life on the planet.[2]

Killing the hyenas in the area gives the player the quest