Objects are parts of the in-game world, represented by graphic models.

Objects are either permanently fixed in place, permanent spawns (such as specific quest objects) or random spawns (such as chests). Spawning objects may disappear after use or death, although they may respawn in the same place later.

Terrain is a feature of vast scope, not generally classed as an object.

Many objects can be used, selected, or targeted.

Some objects can be picked up and carried by player characters, becoming inventory items.

Objects can be more than one type. The types are property descriptors. 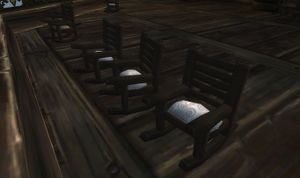 in range to use