Obsidia is a black dragon that flies over the Vortex Summit in the Blade's Edge Mountains of Outland. She also appears in the Obsidian Lair in Twilight Highlands as level 85 elite mob. She is also revealed to be one of the last breeding black dragons, marked for extermination by Alexstrasza herself.[1] 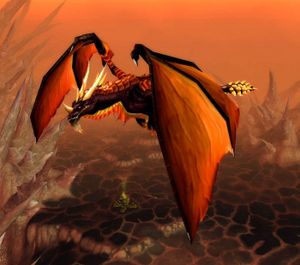 She can be called down to fight as part of the Ogri'la series of quests, or at any time by opening Obsidia's Egg at Obsidia's Perch (requires 35 Apexis Shards. When summoned, she lands and attacks the party. Be very careful around Obsidia - if she detects you she will spit a fireball at you. (~3000 damage)

A balanced 5-man party should have no trouble with Obsidia. Although she has a fair amount of health and a range of abilities, her damage output is low, even when the tank is feared.

Obsidia drops a variety of items, usually including a random rare item, and also an 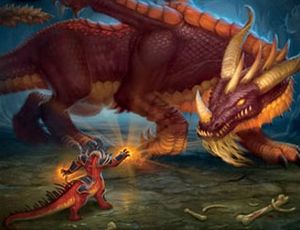 Obsidia is the goal for