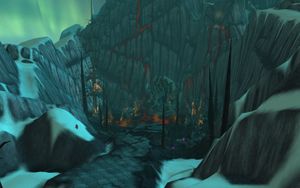 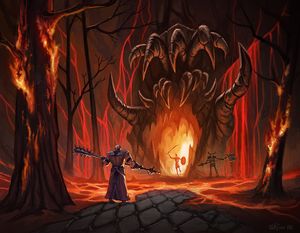 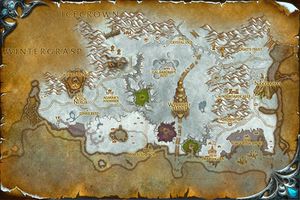 is the black dragonflight's dragonshrine located at the base of a volcano in northwestern Dragonblight. This charred site is a sacred place for the flight which will do whatever is necessary to remove the invading Scourge.

Adventurers are sent here by a bitter Nalice to aid Serinar in defending it. While its location at the foot of a volcano reflects the earth-warding duty afforded to the black dragonflight and the potent energies within the earth, its constant smoldering nature is also reflective of the dragonflight's destructive nature and is likely not due to the actions of the Scourge. 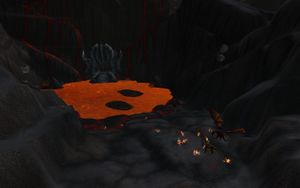 Obsidian Dragonshrine in the End Time.

Enraged by his failure to protect the world and, most importantly, the Horde, this time-ravaged shade of Baine Bloodhoof lingers within the ruins of the Obsidian Dragonshrine. Although he's still as powerful as the tauren high chieftain from the present, within this shattered future Azeroth, this guilt-ridden echo is little more than a discordant vessel of unquenchable malice and anger. The remaining black dragonflight still wanders their sacred ground, trying to prevent any intruders from entering.

The mobs are in packs of three, with one each per group. Some groups path, while some are stationary. It is suggested groups take out the Seers first.

At an undisclosed point in the future, the Obsidian Dragonshrine comes under attack by Burning Legion-controlled undead, much to the dismay of Wrathion. Zorathides plots the death of Chronormu.