From Wowpedia
(Redirected from Obsidian Statue)
Jump to: navigation, search 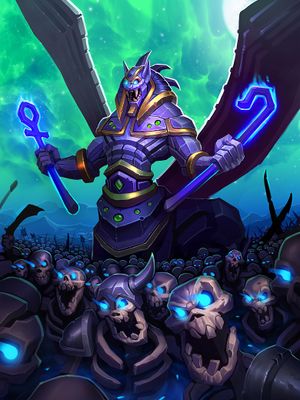 An obsidian statue in Hearthstone.

Obsidian statues are constructs used by the Scourge that can transform into obsidian destroyers. At least three immobile obsidian statues can currently be found in Ahn'Qiraj.

The Obsidian Statue in Warcraft III.

From Obsidian Statue at Battle.net

Fortified statue that can regenerate the health and mana of nearby friendly units. Can research Destroyer Form. Believed to be gifts granted by Ner'zhul, the Obsidian Statues are often used as figureheads at the forefront of many Undead armies, inspiring awe and fear in the enemy ranks. Nothing can prepare the enemy for what this unfathomable statue could become. Attacks land and air units.

This description is the same as the description on page 14 of the Warcraft III: The Frozen Throne manual.

Shaped like a humanoid torso atop the lower body of a winged, powerfully-built panther, this large construct seems an impressively realistic likeness. Carved out of the dark stone from which it takes its name, an obsidian statue has eerie, green eyes that shine brightly within deep sockets. Undead armies use obsidian statues as figureheads, placing them at the forefront of battle or near strategically important locales, such as armories or headquarters. They inspire awe in the hearts of their enemies, but more importantly they provide useful support to their undead masters. Obsidian statues fight without thought or tactic, using their mystic blasts to pummel those foes close to them. They hate living beings and strike at any living creature that comes within range. Obsidian statues never engage undead in battle unless they are directly threatened by them. Obsidian statues do not speak.[1]