Obsidian destroyers are enslaved titan-forged tol'vir who are made out of obsidian.

The entities known as obsidian destroyers are actually enslaved stone tol'vir. The tol'vir were created to maintain titan lore repositories and titan machinery surrounding the titan cities of Ulduar and Uldum. Not long after the troll empires divided the insectoid kingdom of the aqir, the aqir that traveled north discovered and overthrew the tol'vir dwelling in a titan facility in Northrend. These aqir would eventually become the race we know as the nerubians today, having adapted the tol'vir's architecture for their own purposes. Similarly, the aqir that traveled south ransacked and overthrew a titan research station near Uldum, renaming themselves the qiraji and calling their new home Ahn'Qiraj.[1]

The obsidian destroyers of Azjol-Nerub

The Destroyer in Warcraft III.

The Scourge eventually consumed the nerubian empire and threw its few remaining tol'vir slaves into the front lines.[1] Now known as obsidian statues, the tol'vir were often used as figureheads at the forefront of many undead armies after the Third War, inspiring awe and fear in the enemy ranks.[2] Obsidian Statues, however, were also able to break free of the obsidian stone that held them and fly into battle, swallowing magic to feed their insatiable hunger as they moved between battles and rained destruction down upon their foes.[3] Although many of the few remaining tol'vir slaves died in the front lines, it's possible that more tol'vir still exist deep within the remnants of Azjol-Nerub.[1]

The obsidian destroyers of Ahn'Qiraj

Moam, an obsidian destroyer in World of Warcraft

The combined forces of the night elves had proven themselves a formidable enemy to the qiraji, but during the War of the Shifting Sands it was the bronze dragonflight that first taught the insect race the meaning of fear. As the dragons slaughtered wave after wave of silithid, losing few of their own in the process, the Twin Emperors realized their forces were ill-equipped to deal with such powerful creatures of magic. To combat this shortcoming, Emperor Vek'lor focused his efforts on designing a mechanism capable of fighting the ancient wyrms. These preliminary efforts, however, were wrought with failure. Aided by whisperings from his ancient master, Vek'lor pressed on and developed a new kind of construct. Though pleased with his progress, even the qiraji emperor could not guess what dark purpose lay in store for the machines. To Vek'lor's surprise, his inert creations were quickly imbued with limited sapience by his shadowy overseer, as well as a mysterious power — the ability to drain the magical energies of living creatures. In addition, these energies could be stored and then released in a tremendous burst of incendiary mana, making Vek'lor's latest creations among the deadliest in the qiraji arsenal. The first destroyers proved extremely effective; the dragons were not accustomed to fighting enemies that were capable of retaliating from a distance, and they never found an effective way to counter the mana-draining powers of these obsidian statues. And so Anachronos, child of Nozdormu, sought the aid of the remaining dragonflights and history tells us that the qiraji were sealed behind the Scarab Wall shortly thereafter. Those dragons who survived the war still dread the return of these magic-stealing monstrosities.[4]

Though the wall prevented the qiraji from venturing out, the insect empire refused to remain idle. In preparation for their reemergence in the world, the shadowy master of Ahn'Qiraj commanded Emperor Vek'lor to create a new obsidian statue superior to all other Destroyers. Emperor Vek'lor named the finished construct Moam, and observed as the dark master infused it with life. He was pleased and surprised to find that the improved Obsidian Destroyer was far more versatile than its earlier counterparts.[5]

The obsidian destroyers of the Black Empire

After N'Zoth was freed from his prison, the aqir awoke in the deserts of southern Kalimdor. Aqiri prophets began constructing new obsidian destroyers[6] and awakening and corrupting dormant ones[7] to help their forces' efforts to merge Ny'alotha with Azeroth, thus bringing back the Black Empire. 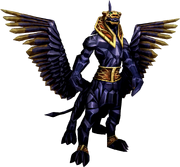 Artwork of an obsidian destroyer.

An obsidian destroyer is a creature made out of obsidian. It has the lower body resembling a powerfully built panther with a pair of great black wings protruding from its back. Almost twenty feet wide, these latter appendages appear carved from old, porous stone. The creature's upper body is humanoid. A pair of dazzling emerald eyes set within deep, cavernous sockets stand out in the midst of the creature's shriveled, skeletal face.[8]

Born from the mystical transformation of an obsidian statue, this strange magical beast is drawn to mana. Because of its appearance, an unmoving obsidian destroyer can easily pass itself off as a statue as long as it keeps its eyes closed. It can thus fool people into believing it is nothing more than a harmless piece of decoration. Most obsidian destroyers enjoy wearing crowns and other ostentatious headdresses that make them appear regal. An obsidian destroyer almost always has see invisibility active. Since it can always see the auras of spells and magic items as its enemies approach, the creature makes good use of its greater dispel magic ability, frequently using it on a target as its first offensive action. Though not a graceful flyer, an obsidian destroyer attacks from the air, targeting the weakest-looking opponents first. Once engaged in melee, it takes full advantage of its thunder strike ability. If its enemies flee before it gets a kill, an obsidian destroyer pursues the slowest target relentlessly until it renders him helpless.[8]

They are simply classified as large magical beasts[9] and large constructs.[8]