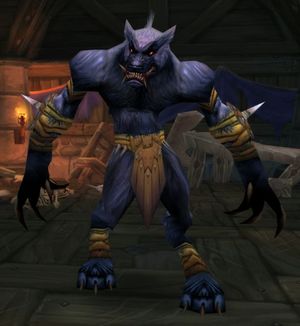 Odo the Blindwatcher, having already been killed in the past, is now summoned as a ghost worgen by Baron Silverlaine during his encounter.

Prior to being killed, he lived in the dilapidated wooden structure hanging precariously off the side of the keep with two pet bats, a Blood Seeker and a Vile Bat. Although he lost his eyesight long ago (hence his nickname), he had adapted to using his other senses, much like his pets.

Odo will be pulled with his two pets. All three must be battled at the same time. As Odo gets more and more damaged, he will cast Howling Rage, a buff that increases his attack power and make him grow in size increasing. He will cast it 3 times, each new Howling Rage more powerful than the last. When he casts Howling Rage, his pets get the same buff. For this reason, you should always kill the bats before moving on to Odo.