“Remember: Life is nothing without Valor.”

Odyn is one of the titan Keepers and is located in the Broken Isles. He rules the Halls of Valor, and was cursed by Helya to be trapped there along with his valarjar army. Despite this curse, however, Odyn could leave the halls in the form of a vrykul named Havi for long periods of time,[5] or under his true form in short bursts. He is referred to as storm god.[6]

Odyn is one of the titan-forged who were empowered by the Pantheon and thus became Keepers. He led the titan-forged armies against the forces of the Old Gods. He was imbued with the powers of Aman'Thul. Together with Tyr, he battled and defeated Ragnaros the Firelord and devised the final plan to bring down Yogg-Saron.[7] For his leadership, determination and courage, he was granted the title of Prime Designate, leader of the titan-forged on Azeroth, and was tasked with watching Yogg-Saron's prison and maintaining the Forge of Wills. Odyn gifted Hymdall with the Gjallarhorn, and if it is sounded, the Keepers are oathbound to answer its call, as it signals that the end times are upon Azeroth.[4]

When the other Keepers decided to ask the Pantheon to empower the Dragon Aspects for their heroism against Galakrond, Odyn was vehemently against it, stating that only titan-forged could be trusted to defend Azeroth. The Aspects were empowered despite his objections, and so Odyn took a section of Ulduar and raised it into the sky, creating the Halls of Valor, and in doing so relinquished his position of Prime Designate.[8] He told the vrykul that those who died a worthy death in battle would have their spirits brought to the Halls and given new immortal bodies infused with the power of the storm to fight as his Valarjar, which Odyn thought would be better defenders than the dragons. In order to retrieve the spirits of the deceased, Odyn would need vrykul to volunteer to become Val'kyr and take those spirits from the Shadowlands. The vrykul objected, and Odyn's adopted daughter, the titan-forged Helya, tried to talk him out of it. Instead, Odyn transformed Helya into the first Val'kyr and ordered her to do the job for him.

Helya nursed resentment against Odyn for thousands of years, until the day Loken, a Keeper who was being manipulated by Yogg-Saron, convinced her to turn against him. Helya used the same magic that had been used to lock the Elemental Plane to seal Odyn and his Valarjar army inside the Halls of Valor, and then decided to take vrykul souls in her new realm Helheim. Helya would be replaced by Eyir as the leader of the val'kyr, and Loken would go on to steal Odyn's title of Prime Designate.[9] 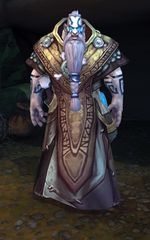 Odyn, as Havi, was one of the order hall champions who met Khadgar and Velen at Krasus' Landing to discuss the Pillars of Creation.[10]

Odyn invites the Huntmaster of the Unseen Path to attend the Night of the Wilds, an event where the spirits of beasts of legend rise in the Fields of the Eternal Hunt.[11] He also tests the Battlelord of his Valarjar as part of an annual trial to determine the strongest warrior in the land.[12]

In recent days, great heroes have arrived in the lands of Stormheim in the Legion's wake. Hoping that their might and determination could tip the scales and end Helya's reign, Odyn summons these champions for a final test, the Trial of Valor.[13]

Odyn seeks mortal champions to vanquish the ruler of Helheim his bitter nemesis, Helya, and secure his freedom.[14]

After Helya's defeat, the curse that bound Odyn to the Halls of Valor was at last broken. Odyn said that it had been ages since he last looked upon the halls of Ulduar and that perhaps he should visit his watcher kin.[15]

After finally slaying Helya, the Valarjar would also recover her horn, capable of commanding the legions of kvaldir who are cursed beyond redemption. Odyn commanded the Battlelord use the horn to direct kvaldir against key Legion targets on the Broken Shore.[16][17]

According to Valdemar Stormseeker, Odyn has heard about the Azerothian heroes' search for

[Azerite], and his vrykul forces have gathered what they could.[18]