For lore about ogres, see Ogre.

The Ogres came through the portal that brought the Orcs to this land. Their blood hatred of the Orcs remains second only to their hatred of humans. They are a vicious opponent, with the strength to rip off a warrior's limbs should they so choose. The Ogres favor huge, spiked clubs that they use to bash in the skulls of their enemies and to bring down the large prey they hunt. Ogres favor lands not frequented by the Orcs, and are seldom seen near the encampments.[1]

Brethren to the Orc clans, these brutes have less intellect and more strength, making them a fearsome opponent in any battle. Often found dwelling in secluded areas of the kingdom, they do not like to be disturbed. They are ponderous and necessarily single-minded to the task at hand, which is usually the killing of anyone they do not recognize. Their massive jaws and glazed eyes give them the look of a crazed animal, and they have the temperament to match.[2] 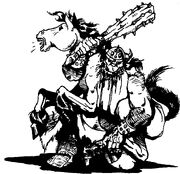 An Ogre as seen in the Warcraft: Orcs & Humans Manual.

Ogres are found in the missions The Deadmines, The Deadmines and Northshire Abbey as well as in some Custom Game dungeon maps. They are formidable units and can withstand a few blows before dying. Ogres are more powerful then Footmen/Grunts, but weaker then Raiders/Knights. As they explode instantly upon death, they cannot be raised into The Dead.

The Ogres in the Northshire Abbey mission have upgraded weapons and armor, improving their stats as shown in the unit box above.