Ogre magi, ogre-magi, or ogre-mages[1] (singular: ogre mage, ogre-mage, or ogre magus)[2][3] are two-headed ogre spellcasters who are typically larger and more intelligent than their one-headed brethren. They often enjoy an elevated position among the ogre clans.[4]

The early ogres' practice of sorcery and exposure to raw arcane magic had some unexpected side effects. Very rarely, children would be born with two heads. It soon became clear that these two-headed ogres were exceptional spellcasters, and their appearance was seen as a good omen. In time, Goria's arcanists even developed spells to replicate this phenomenon, causing normal ogres to grow a second head and increasing their intelligence and magical aptitude.[5]

During the Second War, Gul'dan and his followers chiseled away at one of the high elven runestones of Quel'Thalas to create structures known as the Altars of Storms. Gul'dan then turned to the ancient arcane rituals that were once used by the Highmaul ogres to create two-headed ogres. Few living ogres knew of this technique, but Gul'dan's follower Cho'gall was one of them. He handpicked the ogres who would undergo the transformation and oversaw the rituals himself. Before long, ogre magi emerged from the altars, and they were just as powerful as Gul'dan had hoped, and more importantly, they secretly swore their loyalty to him.[6][7][8]

An Ogre Magi in Warcraft III.

Two-headed ogre magi are noted as being larger and stronger than their single skulled brethren, and having slightly different proportions; shorter arms, less bowed legs, and carrying themselves with greater alertness.[9]

One especially notable feature of some ogre magi is that their twin heads act, think and speak independently of one another. The most notorious example of this is Cho'gall, whose right head is shown to be more well-spoken and intelligent while his left head is louder and more fanatical. Another notable example is Warbringer O'mrogg, whose two heads have always struggled to agree on even the simplest matters. Two years ago, O'mrogg began a twelve-step plan to develop a synergy between his warring personalities. His heads have yet to decide on which step to start with.[10]

However, this is not always the case: the twin heads of Dentarg, Torkus and Imperator Mar'gok all speak in unison (although the former two refer to themselves as "we" rather than "I"). In fact, Mar'gok is puzzled when one of his heads begin to get dizzy after having stared out across Highmaul for hours, as he notes that his two brains have always worked together in much the same way two legs should. Directly thereafter, the imperator ponders how it would be to experience the world like one of his one-headed, one-brained, two-eyed subjects, and muses that it would be impossible to rule that way, as he would have to focus his entire gaze and all his thoughts on a single point at a time, and everything would seem blurry.[11]

As shown by Torkus and his children — Torkus Jr., Tork and Torki — the offspring of a two-headed ogre will also have two heads. 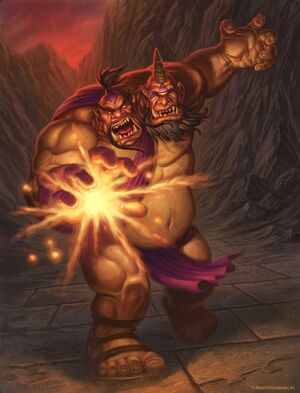 Cho'gall, one of the most notorious of the ogre magi.

An ogre mage as seen in the Horde Player's Guide.

As seen on the cover of the Manual of Monsters.

Ogre magi came into existence in the Second War, when the orc warlock Gul'dan carved up the elven runestone at Caer Darrow and used its mystic powers to imbue Ogre enforcers with the ability and intelligence to cast spells. The experiment was a success, with the only noticeable side effect the fact that it turned the ogres' skin blue. A small price to pay for the power they wield — indeed, blue skin is now a sign of cunning, potential and might among ogres.[12]

Other sources of history state that the ogre magi race was created by the magics of the Altar of Storms and that Cho'gall was the first to be changed, having been a normal ogre before hand.[13]

Following the Second War Ogre magi have become alot more common. It is speculated that they can breed to produce their own kind (confirmed by Torkus and his many sons), while others think that some ogre magi — or darker forces — have developed a way to create more of them. Whatever the case, though ogre magi don’t appear in the numbers they did in the Second War, they are still a part of Azeroth. Because of their intelligence, and the fact that they often desire to search for arcane knowledge to enhance their spellcasting abilities, ogre magi are more likely to adventure than other ogres. Many remain with their own kind and have become advisors to the chieftains of their tribes or leaders in their own right. Their spells, combined with their physical might, make them self-sufficient. Adventuring ogre magi are uncommon, and meet with stares or violence in civilized towns, but they possess the smarts necessary to talk their way out of many volatile situations. Ogre magi allied with the Stonemaul clan are welcome in any Horde settlement, but the Alliance views all ogres as savages and enemies.[12][14]

In many ways, ogre magi are similar to their less intelligent brethren. They belong to the same society. Because of their intellects and magic powers, ogre magi are often in leadership positions in an ogre clan. However, because they focus on developing their spellcasting potential, they are often not as strong physically as other ogres, and ogre chieftains and warlords are usually mighty barbarians or warriors instead of magi. However, such a leader usually has one or more ogre magi advising and assisting him.[12]

Like normal ogres, some ogre magi have two heads. Their heads usually get along with each other. A two-headed ogre mage is not different from a one-headed ogre mage having the same characteristics, including equal intelligence.[15]

Ogre magi are less chaotic than their brethren. Their intellect creates an awareness of power structures and allows them to understand political machinations. Ogre magi respect power; thus they served Gul'dan in the Second War. Most ogre magi are ambitious and seek to secure both political and magic power.[16] These ogre magi have since become the spiritual leaders of the ogre tribes. They provide spells and magical items to protect the tribes from more established civilizations. Magi are the healers, record-keepers, and advisors to the chieftains.[17] A given tribe will have ogre magi, usually one for every ten individuals. That is a twenty member tribe will have two ogre magi or one ogre magus. Occasionally a chief will be an ogre magus, but this is rare. They favor the sorcerer class, though healers, shamans, and warlocks are common. A few rare ogre magi become wizards, but the need for writing materials can limit their pursuit of magic.[18]

In addition to gaining intelligence, a newly created ogre mage’s skin turns blue.[19] Those who pursue the path of the warlock develop a blue tinge to their skin, a side-effect of wielding necromantic energies.[20]