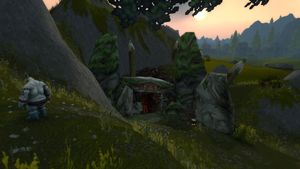 Boulderfist Outpost in the Arathi Highlands.

Ogre mounds are the crude stone huts and caverns favored by the ogres for their dwellings. They are often built around steam vents, implying that ogres seem to prefer dark and hot areas.

While not an ogre mound, an abandoned part of the Deadmines was used as a refuge by Turok's rogue band of ogres during the times of the First War.[1] Ogres could only be found in other similar dungeons-style maps.[2][3]

After being trained in the rudiments of combat at the barracks, ogres congregated at these crude, stone huts to enhance their endurance, strength and speed. These two-headed titans increased their great strength by engaging in contests which involved the hurling and crushing of giant rocks. This served to increase their already formidable strength and resilience - and those that did escape the pounding delivered by their brethren found themselves the quicker for it. Even the half-witted peons dared not come near this place, for stray boulders tended to find the heads of inattentive visitors.[4]

Ogre mounds can be found all throughout Azeroth and Outland - an ogre mound is usually found anywhere ogres are living, but the ogres are capable of also creating more sophisticated dwellings. The citizens of the Gorian Empire in alternate Draenor lived in elaborate cities of stone during the height of their civilization.

Glubtok is said to have burned his own ogre mound.