“We ogres are not all bad.” 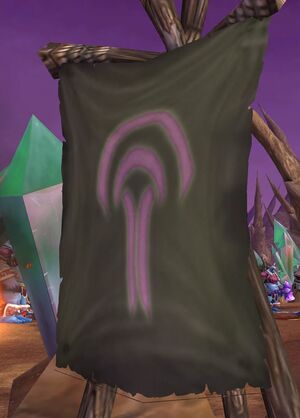 Ogri'la is a faction of ogres introduced in The Burning Crusade, located in the Blade's Edge Mountains in Outland at their own settlement. Unlike most of the other ogres in the zone, the Ogri'la are peaceful and willing to cooperate with other races, in the hope of helping their more brutish kin in the dry and dusty valleys below their sanctuary.

Players start out Neutral with Ogri'la.

Note that all faction items require Apexis Shards while the rare and epic items also require Apexis Crystal (item)s. Apexis Shards are gathered from the environment, looted from mobs, and received as rewards for most daily quests in the zone. Apexis Crystals drop from the summoned dragons and demons in the zone; they are elite mobs requiring 35 shards to summon and recommend having 5 players to defeat.

[A Quest a Day Keeps the Ogres at Bay].

"Depleted" items will sometimes drop from mobs and the Shartuul event. These items, when combined with 50 Apexis Shards, gain sockets, stats, or effects. The upgraded items are all bind on equip, so they can be traded or sold to other players. Note that the depleted items, though many already have stats, cannot be equipped.

Gathering a scale from each of the dragons, (Rivendark, Obsidia, Furywing, and Insidion), allows you to create a [Deathwing Brood Cloak]. This is a bind on pickup rare cloak with a random suffix, with stats in the "+27 stamina and +18 to two other attributes" range. If you get a suffix that you're not interested in, you may trade in your cloak for an

[Apexis Crystal] at the Skyguard Outpost. Trading in your cloak does not yield reputation.

NOTE: Remember, when you are interested more in the money than the Deathwing Brood Cloak or Apexis Crystals, sell this cloak to a vendor instead of trading it for an Apexis Crystal. The cloak will vendor for 2

, and trading in for a crystal is Apexis Crystal 80

Completing A Special Thank You rewards an [Ogri'la Care Package] which can contain:

If none of these Reward Items are useful to your character, you can always use the Apexis Shards and Apexis Crystals you receive to make some money by checking out the following information.

each when used for buying the Crystal Healing Potion and the Crystal Mana Potion. For all the other vendor rewards items (Honored, Revered, and Exalted), the Apexis Shard value is 2

each and the Apexis Crystals are valued at 80

Once you are past the Friendly Reputation for Orgi'la it doesn't matter which reputation reward you choose from the Honored, Revered, and Exalted items as all shards are valued at 2

and all crystals are valued at 80

. Just pick any item and go sell it to the nearest vendor.

If you find any depleted items, use your shards to combine with all those items because they raise the shard values to anywhere in between 4

each when crafted and sold to vendors. As an added bonus all the items that you craft when combined with Apexis Shards are 'Bind on Equip' so they can potentially be sold on the Auction Houses as well. The only exception is [Depleted Crystal Focus] as it creates a [Charged Crystal Focus] which is a special item and has no sell price at all.

To start obtaining Ogri'la reputation, one must first finish a chain of quests starting in the lower city of Shattrath leading to Mog'dorg the Wizened in Blades Edge Mountains.

How long will it take?

Doing nothing but the repeatable daily quests, it will take you about 30 days to max out your Ogri'la reputation from Neutral. This does factor in the quests needed to unlock the dailies, and the fact that you can do the dailies twice the first time. The group quests are not included in these calculations, so doing those will lower the time required.

[70] Wrangle Some Aether Rays! (along with other such quests that require weakening mobs) is problematic to do at high level due to the increased damage such players are capable of. There are a number of ways to complete the quest: 1) find someone else of the appropriate level to weaken the mobs for you; 2) suicide by dropping from high in the air, and taking the Spirit Healer's rez sickness; 3) use an item such as the

[G91 Landshark] on the aether rays. This will bring them down to the weakened state with one shot, allowing you to wrangle them.