For the ogre in Dustwallow Marsh, see Ogron (ogre). For the mogu in Throne of Thunder, see Ritualist Ogron.

"It is hard to admit that there is a creature more brutal than an ogre, but the ogron definitely fit that description."[1]

The ogron are cruel, brutish giants native to Draenor. Part of the Breaker lineage, they are descended from gronn (and in turn the magnaron and colossals) and are the ancestors of the ogres and orcs.

The ogron were hunted to extinction by the Old Horde in the main universe but are still present in the Draenor of an alternate timeline, where they frequently serve as enforcers for the Gorian Empire and the Iron Horde. With the introduction of the Mag'har to the Horde alongside their Breaker servants, the Ogron have been restored in the main universe.

As the stone giant Grond battled the Sporemounds, pieces of the battling leviathans fell to the earth and gave rise to the colossals, children of Grond, and the genesaur, children of the Sporemounds. After Grond's death, the colossals continued fighting the Sporemound Botaan and its minions, but over time many of the stone giants succumbed to their foes. From the colossals' remains, new creatures known as magnaron emerged. After the colossals sacrificed themselves to destroy Botaan in a massive explosion, spores from the plant creature's body, teeming with the Spirit of Life, drifted back to Draenor's surface and clung to the hides of the magnaron, weakening their bodies. Some of the magnaron devolved into beings called gronn, and due to the lingering effects of the spores, a small number of gronn continued degenerating into the ogron. The ogron, in turn, gave rise to the ogres and finally the orcs. The magnaron, gronn and ogron were known collectively as the Breakers, and though different in many ways, their common ancestry united them against the plant-like Primals, the descendants of the Sporemounds. For many long ages, the two factions engaged in sporadic battles with one another, neither side ever managing to destroy the other.[2] 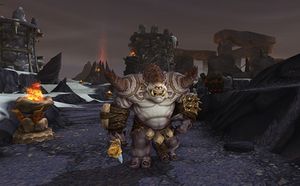 An ogron wandering through Frostfire Ridge.

By the time that the arakkoan Apexis empire fell, the children of stone had grown in number and spread across the land. The ogron, though brutish, cruel beings, quickly learned the value of working together and formed rudimentary societies: strength in numbers meant the conquest of their rivals, while isolation meant defeat and death. These early tribes warred constantly, for the pride of an ogron was easily wounded, and only blood could repay an insult. Most of the world's other races were beneath their notice, save when they could serve as food or slaves. Even their relatives, the ogres and orcs, quickly learned to fear the ogron's attention. The best fate a conquered ogre clan could hope for was to be sent into battle as disposable combatants against other ogron tribes, while their sick, weak and elderly clan members were typically offered as living sacrifices to appease the gronn and keep them from attacking ogron territories.[3]

One day, a group of arakkoa led by Yonzi sought to claim a ruined Apexis settlement in Talador, a place now occupied by ogron. Attempts to bribe or barter with the ogron ended violently, leading the arakkoa to instead begin teaching the ogron's ogre slaves the arts of arcane magic in the hopes that they would rebel against their masters. One of the first to master this new power was named Gog. He strode forth, empowered, but not to fight the ogron: instead, he targeted the gronn, whom all ogres revered and feared as deities. Though stunned, the arakkoa could not argue with the results. Gog did not only kill one gronn with his magic, but several. By his fifth, stories of his deeds were known to all captive ogres on Draenor, erasing their fear of both gronn and ogron. The ogres rose up together against their ogron overlords, igniting a bloody war. In the end, nearly every ogron tribe fell to their captives, and the ones who were not torn limb from limb by the ogres were forced to scatter across the world to escape. Not soon thereafter, Gog founded the Gorian Empire, which soon spread across the world.[3]

Thousands of years later, the Orcish Horde marched across Draenor. Warchief Blackhand tasked the orcish Frostwolf, Thunderlord and Whiteclaw clans with wiping out Draenor's gronn, ogron and magnaron, as well as the ogres that had refused to join the Horde. The Frostwolves and Whiteclaws saw no honor in hunting the giants down and held most of their warriors back, but Chieftain Fenris and his Thunderlords did not shy away from the task and reveled in the slaughter of their ancient enemies.[4] It is said that most of the ogron were slain during this time.[5]

On the alternate Draenor, the ogron are still prevalent and are mainly found serving as enforcers for the Gorian Empire and the Iron Horde. The "Twin Ogron", Pol and Phemos, serve as the personal guards of the ogre sorcerer king himself, Imperator Mar'gok.[6] Most of the ogron assaulting Alliance and Horde frontlines were determined to be coming from the Broken Precipice deep in western Nagrand.[7]

A Horde adventurer and Eitrigg manage to open a portal back to the alternate Draenor, arriving decades after they last set foot on the planet. Gaining the alliegance of the Mag'har clans, they escape to Azeroth as the Lightbound draenei set upon them.

Alongside the Mag'har are their Breaker servants, which includes ogron. As a result, the race returned to the main timeline for the first time since the Old Horde purged them. 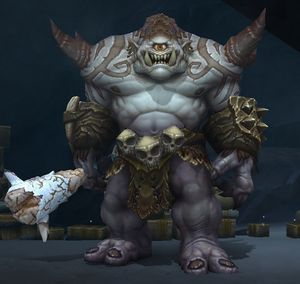 Ogron are more intelligent than their gronn progenitors, but not as strong.[2] They take in their surroundings with a single yellow eye—slow to blink and even slower to comprehend. Too idiotic to disobey orders, but big and dangerous enough to keep even unruly ogres in line, ogron serve as expendable muscle for ogre leaders from warlords all the way up to the emperor himself. Any champions seeking to overthrow ogres in power had best prepare to face down one or more ogron towering in their way.[8]

Rokhan describes the ogron as brutes and as creatures from a time that was best left forgotten. What they lack in wisdom they make up for in violence, force and greed, and where the ogron goes, death and pain are sure to follow.[5] Facing a captured ogron in the arena is considered to be no mean feat. Facing one in their own lair is something even more dangerous.[1]