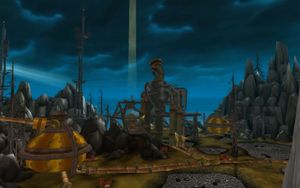 Refinery on the Isle of Conquest.

Oil refineries are buildings that process the oil collected from oil platforms. Although oil is commonly used in the construction and powering of ships, it has been utilized in the development of both experimental flying craft and extremely powerful weapons.[1]

During the Second War, Grim Batol was the primary base of the Horde's refinery operations in Khaz Modan.[2] Stratholme was the chief source of Alliance oil in the north and its refineries got attacked by the Horde.[3]

These large steel-shod buildings were designed to refine raw oil for use in the construction and maintenance of the Alliance fleets as well as the creation of unconventional war machines. Like the shipyard, a refinery was built along the coastline so that tankers could deliver their cargo directly to its doors. A refinery allowed oil to be processed with far greater efficiency, increasing the amount of usable oil garnered from every load of crude.[4]

The oil refinery used the large, arching pipelines on either side of the main structure to pump oil from the tankers into its processing holds. Built on the rim of the sea, refineries were constantly threatened by attacks from waterborne vessels. As a refinery allowed oil to be processed much more efficiently, the sight of warships deployed for the defense of these structures was a common one.[5]

The Alliance of Lordaeron dismantled the orc refineries after the Second War and stripped their ships for parts.[6]

Both Warcraft III and the early years of World of Warcraft downplayed the importance of oil in the war efforts of both Alliance and Horde, and as such oil refineries were inexistent in Azeroth, but their number have slowly been growing since Wrath of the Lich King.