Oil tankers are ships used to transport crude oil from oil platforms out in the ocean to oil refineries on the main land to be processed into useable oil. 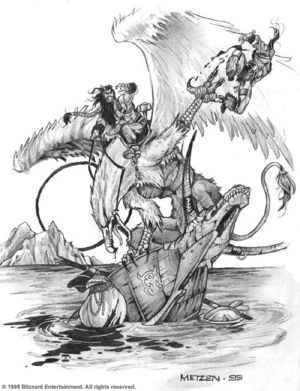 A gryphon rider sinking an Horde tanker during the Second War.

As the only ships which did not require oil to be built, oil tankers made possible the construction of the Alliance fleet. They were manned by hard working, dependable mariners who searched for the rich oil deposits which lied beneath the waves. The crew of every tanker was skilled in building oil platforms and ferrying the oil back to a shipyard or oil refinery where it could be processed and put to use.[1]

The orc oil tanker was crudely constructed, as its purpose was for bearing cargo - not weapons or troops. The tanker, being little more than a collection of wood, bone and storage space, was crewed by a mob of orcs scarcely more capable than the lowly peons. Other than being able to pilot the craft, the crew of the tanker performed tasks equivalent to those of a peon - building oil platforms and returning their cargo so that it could be processed and used as the overseer chose.[2]

While oil tankers don't appear in World of Warcraft, an off-shore oil rig can be built by adventurers in alternate Draenor. It can only be assumed that oil tankers are then assigned to transport the precious material back to shore.